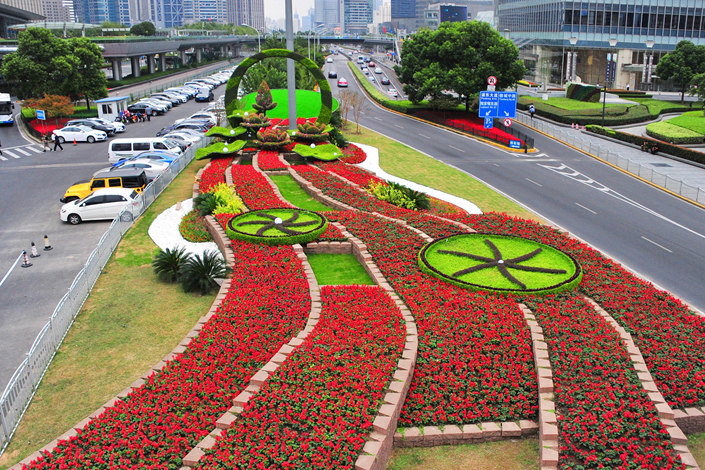 A floral display in Shanghai marks the coming of the China International Import Expo. Photo: VCG

Australia’s new trade minister, Simon Birmingham, senior state politicians and the country’s major exporters are scheduled to be in Shanghai next month for Chinese President Xi Jinping’s signature import expo in the latest sign of a thaw in diplomatic tensions between Beijing and Canberra.

Sources in Shanghai said Birmingham’s visit was all but confirmed, making him only the second senior federal minister to visit China this year. He is expected to lead one of the biggest Australian delegations to China in years, meet senior Chinese officials and give a keynote speech at a business dinner on Nov. 5 in Shanghai.

About 150 Australian companies are expected to attend the China International Import Expo (CIIE), a huge trade fair that China is promoting as a major step forward in its efforts to open up the world's second-largest economy at a time when it is under siege from Washington.

“This is a significant event for China and their economic engagement with the world, which Australia will have a significant presence at. I hope to attend and to reinforce Australia's acknowledgement of the positive contribution China has made to regional economic development,” Birmingham told The Australian Financial Review in a statement.

Birmingham’s office stopped short of confirming the visit but there is widespread expectation in the business community in Shanghai that he will attend. Ministerial visits to China can often be complicated by red tape and are often not confirmed until the last minute. Beijing unofficially blocked requests for ministerial visits this year due to diplomatic tensions.

John Brumby, the national president of the Australia China Business Council, said senior politicians from both sides of government, including Labor's trade spokesman Jason Clare, would attend the expo. “It is going to be bigger than ‘Ben-Hur,’ ” he told the Financial Review, referring to the renowned 1959 movie.

“Xi Jinping’s two signature initiatives are Belt and Road and CIIE. So in that sense it is extraordinarily important. The economic opportunity for Australia remains immense.”

Brumby, a former Victorian Labor premier, will also represent the state in Shanghai as it goes into caretaker mode. He said more than 150 companies from Australia will be attending. “It will send an important message to China and the Chinese government that Australia welcomes this opportunity, welcomes stronger engagement with China and we are here at the highest level.”

Former trade minister Steve Ciobo, who visited Shanghai in May, was originally leading the business delegation to China before he stepped down from the role as part of a ministerial shuffle following the change in prime minister. Birmingham will only be the second senior federal minister to visit China this year.

About 3,650 companies from more than 130 countries are expected to attend, according to Chinese officials. The endorsement of Xi, who is expected to give a speech at the event's opening, means local officials and the country's media have thrown their weight behind the expo, which will have a total booth area of more than 270,000 square meters.

Australia Post, Metcash, Blackmores, Swisse, Meat & Livestock Australia, Qantas Freight, Treasury Wine Estates, A2 Milk, Freedom Foods and Tourism Australia are among the Australian companies with a presence. Many of Australia’s big importers are sending senior executives to China for the expo. Victoria will be strongly represented with about 50 companies that have offices in the state attending.

However, many exhibitors have privately complained about space constraints at the expo or the lack of detail Chinese authorities are providing around the event.

Senior politicians from most Australian states are also expected to attend, making it the biggest representation of senior Australians in China for some years. The Australian China Business Council will hold a board meeting at Rio Tinto’s headquarters in Shanghai during the expo, which runs from Nov. 5-10.

Beijing, faced with an increasingly hostile United States, last month signaled it was willing to rebuild its relationship with Australia under the Morrison government. Chinese Foreign Minister Wang Yi said he was confident the relationship could “get back on track” after meeting his Australian counterpart Marise Payne on the sidelines of the United Nations General Assembly.

Diplomatic tensions between Canberra and Beijing began to ease following a conciliatory speech from former prime minister Malcolm Turnbull in August, although the relationship will continue to be tested by China’s growing influence in the Pacific, foreign investment and ongoing security concerns. Brumby said Turnbull’s speech in August was the first stage of a reset in the relationship.

“That was a positive step forward and a strong attendance here in Shanghai also sends an important message about how much Australia values its relationship with China. That is not to say everything is perfect at the moment,” Brumby said.

“It is important at this stage of the relationship that business send a very strong message about how highly we value the Australia-China economic relationship, and Australian businesses welcomes the opportunity.”

During a visit to Shanghai in May, Ciobo said Australia was the first country to be invited to the CIIE and that it delivered on Xi’s commitment to open the Chinese economy to the world. He also met with Shanghai's mayor, who encouraged Australian companies to take part in the event.