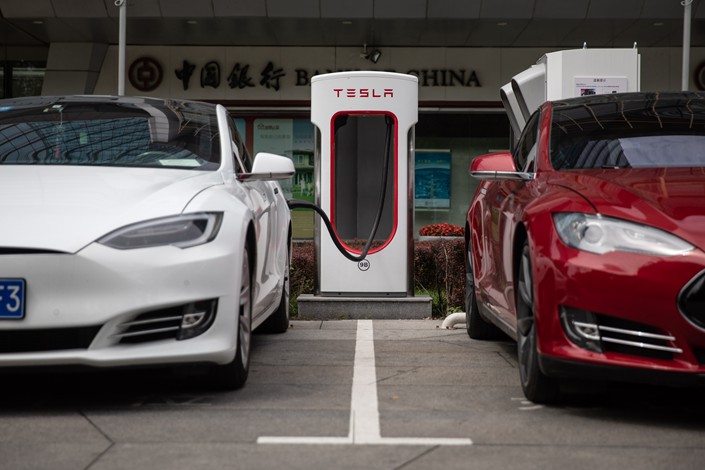 Electric cars top up their batteries at a charging station in front of Tesla’s China headquarters in Beijing on July 25. Photo: IC

The Chinese unit of U.S. electric-car giant Tesla Inc. has boosted its registered capital by almost 50 times, as it ramps up efforts to expand into the world’s largest auto market.

Tesla (Shanghai) Ltd. Corp., established in early May by Tesla’s Hong Kong unit, has seen its registered capital rise to 4.67 billion yuan ($680.4 million) from the previously announced 100 million yuan, according to Tianyancha, a company data provider.

The firm’s business will also expand into manufacturing, including areas like auto parts and battery systems, the updated company filing showed.

Previously, Tesla Shanghai said it would mainly be involved in the research and development of electric vehicles, their parts and batteries.

The business update comes after the U.S. giant signed an agreement with Shanghai authorities to set up a wholly-owned plant capable of producing 500,000 electric vehicles a year.

The Shanghai factory is crucial to the California-based automaker, which has been eager to ramp up production to meet increased domestic demand. China is now Tesla’s second-largest market, where it sold around 17,000 vehicles last year.

Earlier this year, the Chinese government rolled out a new policy that allows foreign companies to set up their wholly owned auto ventures in the country, making the Tesla’s Shanghai factory plan a reality.

However, even without the regulatory hurdle, the loss-making company would still find it challenging to make inroads in China. Tesla has said it will seek to take on local debt to fund its Shanghai factory, widely expected to cost as much as $5 billion.

Also, Tesla is expected to face strong competition from local rivals. Domestic leader Nio Inc., which has filed for an initial public offering in New York, is also planning to set up a factory in Shanghai.