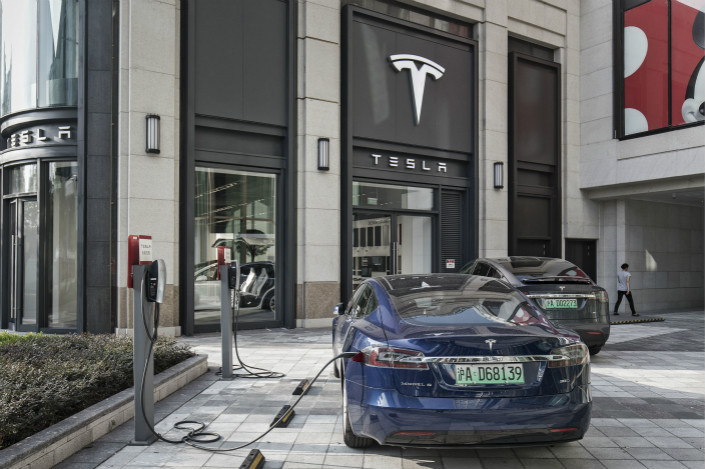 A Tesla Model S is charged outside the company's Shanghai showroom in on Sept. 12. Photo: VCG

U.S. electric-car maker Tesla Inc. has established a new company in Shanghai to offer services that include research and development, as well as engaging in import and export businesses.

Tesla (Shanghai) Ltd., whose sole shareholder is Tesla’s Hong Kong unit, was established May 10 with registered capital of 100 million yuan ($15.8 million), according to a filing it posted on the National Enterprise Credit Information Publicity System website.

The new company will provide technology development and consultation for electric vehicles, their parts and batteries.

The move comes soon after Beijing rolled out rules to open China’s car market by allowing foreign automakers to take full ownership of their local ventures in the coming years.

The new policies, which will abolish the current 50% foreign-ownership cap on electric vehicle manufacturing by the end of this year, are widely expected to benefit electric car producers like Tesla.

Tesla had been negotiating with Shanghai last year to open an assembly plant in the city, but the plan stalled, reportedly due to disagreements on ownership structure.

Early this month, Tesla CEO Elon Musk said the company planned to announce the location of a plant in China as early as the third quarter this year.