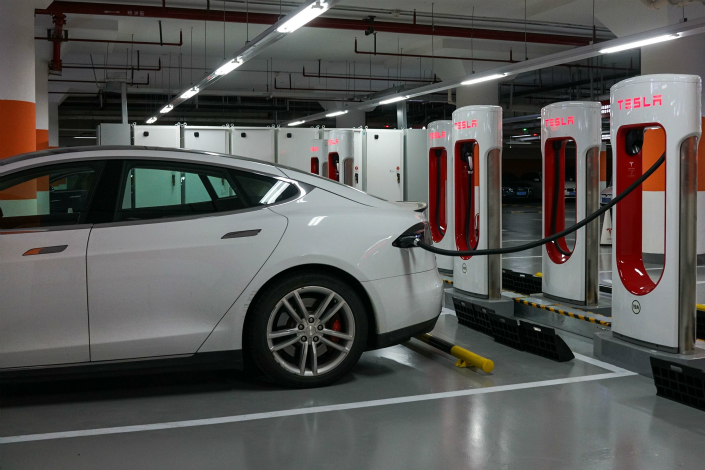 Tesla’s new R&D center in Beijing will work on electric vehicles, their parts and batteries. The venture is the U.S. automaker’s latest effort to infiltrate the Chinese market, which is now its second most important after the U.S. Above, a Tesla vehicle charges its batteries inside a mall in Shanghai on Oct. 23. Photo: Visual China

Tesla recently set up a research and development (R&D) center in Beijing, one month after the central government confirmed the company is looking to open a factory in Shanghai.

The new R&D center will work on electric vehicles, their parts and batteries. The scope of its business will also include the transfer of R&D achievements, technological services and consulting, according to the filing.

The venture is Tesla’s latest effort to infiltrate the Chinese market, which is now its second most important after the U.S.

Last month, the Ministry of Commerce confirmed for the first time that Tesla was in discussions with the city’s government about the construction of a production facility in Shanghai’s free trade zone.

China’s central government has recently moved toward easing restrictions imposed on foreign automakers as the country ramps up efforts to develop the electric car industry.

China’s Ministry of Foreign Affairs said this month that the current 50% ceiling on the size of the stake that foreign companies can hold in car factories in the country will be increased by June, as long as the companies are producing new-energy cars in free trade zones.

This policy shift in the world’s largest electric vehicle market could pave the way for Tesla to set up its own wholly-owned factory in the country. Although cars made in China’s free trade zones will still be subject to the current 45% tariff, Beijing has also promised to lower the tax in the near future.

Tesla’s Beijing R&D center could also clear obstacles for the company to obtain a “new-energy vehicle license,” a program that Beijing suspended in June due to concerns that too many companies rushing into the market may have already created a glut in the electric car market.