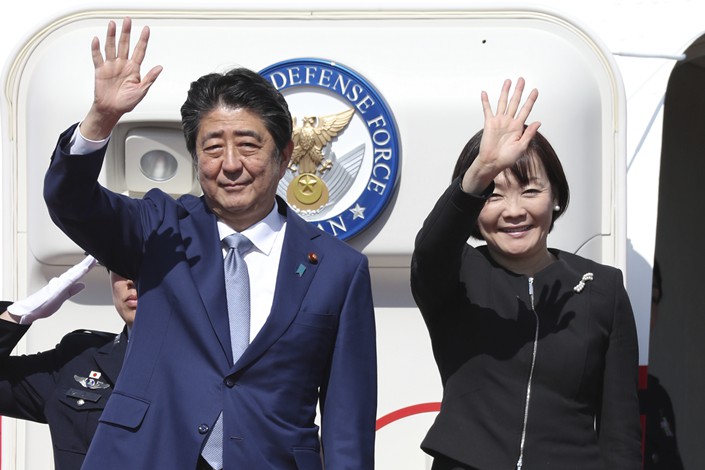 Japanese Prime Minister Shinzo Abe and his wife, Akie Abe, prepare to take off from Haneda Airport in Tokyo on Thursday. Photo: VCG

The China-Japan relationship showed signs of thawing Friday as the countries agreed to increase bilateral economic cooperation and work to eliminate frictions.

Chinese President Xi Jinping and Premier Li Keqiang met with visiting Japanese Prime Minister Shinzo Abe in Beijing, touting warmer ties between the two countries. It is the first official visit to China by a Japanese prime minister in seven years and came as both nations face trade frictions with the United States.

At a news conference after their meeting on Friday morning, Japanese Prime Minister Shinzo Abe and Chinese Premier Li Keqiang announced that they had signed cooperation agreements and more than 500 business deals.

Abe and Li also said they agreed to restart the China-Japan currency swap agreement, which was dropped in 2012, and to start talks on a communication channel on cutting-edge technology and intellectual property. They also agreed to establish a cooperation framework for managing maritime accidents.

Li said the nations “agreed that we do not threaten each other and do not direct aggression toward each other.”

“We need to have constructive ways to eliminate any kind of frictions or conflicts between the two countries,” he said.

The Japanese prime minister has been accompanied on his visit by a 500-strong business delegation that will participate in a forum with Chinese businesses on economic cooperation in third countries on Friday.

Also on Friday, after visiting a forum on infrastructure projects and Peking University, Abe and Xi held talks and attended a dinner.

During the meeting, Xi emphasized the interdependence between the two countries and pledged to enhance economic cooperation.

The bilateral ties “have returned to the right track and showed positive momentum. That is worth cherishing by both sides,” said Xi, according to the official Xinhua News Agency.

China and Japan should engage in more in-depth strategic dialogue, Xi said. “Both sides should accurately grasp each other’s strategic intent and implement what was agreed — that both sides will become partners, both sides will pose no threats to each other,” he said.

Abe said he expects the visit to carve out new areas of cooperation between the two countries and promote bilateral cooperation in broader areas, Xinhua reported.

Abe is expected to invite the Chinese president to visit Japan next year, according to Japanese outlet Nikkei Inc.

The last time a Japanese minister visited China was in 2011 and no Chinese president has visited the Asian neighbor since 2010.

Bilateral relations have frayed over disputes over islands in the East China Sea in recent years, hitting a low in 2012. Many believe that the policies and rhetoric of U.S. President Donald Trump and increasing trade friction between Washington and Beijing have drawn Japan and China closer.

Experts told Caixin that the visit likely will not resolve any concrete issues in the bilateral relationship, but a positive tone would help in moving negotiations forward.

The story was updated with quotes from meeting between Xi and Abe.