Abe’s China Visit: What You Need to Know 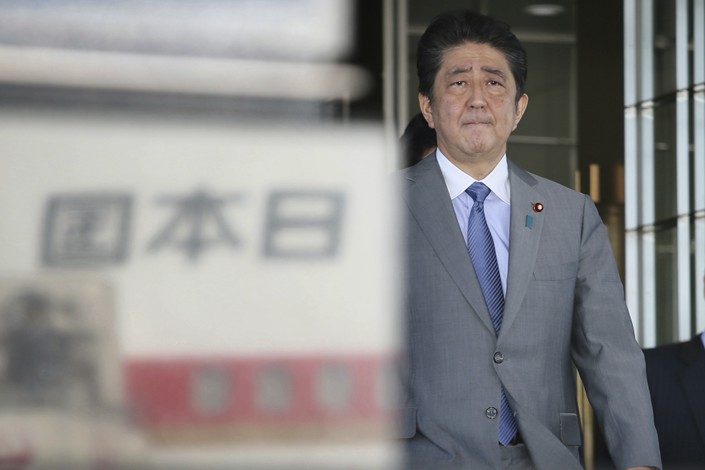 * Timing of Abe’s visit almost coincides with the 40th anniversary of the Treaty of Peace and Friendship between China and Japan, which came into effect on Oct. 23, 1978

(Beijing) — Shinzo Abe’s trip to Beijing this week — the first official visit to China by a Japanese prime minister in seven years — will see the two countries negotiate a complex relationship that has recently been further complicated by U.S. policy toward East Asia.

Abe will meet officially with President Xi Jinping and Premier Li Keqiang from Thursday to Saturday, accompanied by a group of business leaders. Abe told Japanese lawmakers on Wednesday that he intends to expand exchanges between the two countries in areas as diverse as business and sports, The Associated Press reported.

Representatives from the two countries are also expected to sign deals in several areas, especially infrastructure. China’s rise as the world’s second-largest economy, its “Belt and Road” ambitions, and Japan’s position as a major Chinese trading partner but firm security ally of the U.S. are among the issues at play this week, experts told Caixin.

The timing of Abe’s visit almost coincides with the 40th anniversary of the Treaty of Peace and Friendship between China and Japan, which came into effect on Oct. 23, 1978. The treaty was hailed at the time as a key step toward moving past the animosity of World War II and the Second Sino-Japanese War of 1937-45, known in China as the War of Resistance against Japanese Aggression.

Much has changed in the last four decades.

“In 1978, China was still very much a developing country and Japan was projected to be the world’s leading economy by the end of the 20th century. By 2010, China’s economy had surpassed Japan’s economy,” Nancy Snow, Pax Mundi Professor of Public Diplomacy at the Kyoto University of Foreign Studies, told Caixin.

Richard McGregor, a senior fellow at the Lowy Institute, an Australian think tank, said the relationship dynamic had changed dramatically. “China is now far more powerful than Japan instead of the other way around,” he told Caixin. “Neither side had managed to adjust to that — China does not feel like a benign neighbor. In fact, Japan feels threatened. On the other side, after having been ahead of China for so long, Japan has not got used to being No. 2.”

Relations between Japan and China deteriorated over the past decade over a series of territorial disputes and diplomatic spats. But there have been signs of a thaw lately, including Li Keqiang’s visit to Tokyo in May — the first official trip to Japan by a Chinese premier in eight years.

Some point to the nearly 2-year-old administration of U.S. President Donald Trump as a push factor.

“Trump’s disruptive behavior has given both countries reason to talk to each other again; they have a lot of common ground on trade,” McGregor said. But on the other hand, he said, “in security terms, the U.S.-Japan (relationship) has got stronger, and China doesn’t like that. Japan and China have good trade ties but no strategic trust.”

The ongoing trade conflict between the U.S. and China “is an effort in the long term for the United States to take on China’s rise, particularly the ability of the Chinese to build asymmetrical trading relations with almost all nations along the Belt and Road Initiative areas,” said Victor Teo, an assistant professor at the University of Hong Kong Department of Japanese Studies.

At the same time, the U.S. has stepped up its security presence in the Asia Pacific region, through measures including the deployment of its Terminal High Altitude Area Defense missile defense system in South Korea, and landmark talks between Trump and North Korean leader Kim Jong Un.

As a security ally of the U.S., Japan is now “trying to adjust her policy to make the best use of her circumstances and reconcile with China in a way that does not compromise her interests and her relations with the U.S.,” Teo said.

“The improvement in relations is not just about a response to Trump,” Tim Summers, a lecturer specializing in China and international relations at the Chinese University of Hong Kong, told Caixin. “Both countries have common interests in economic engagement, (and) trade and investment.”

What to pay attention to this week

China is hoping Abe’s visit will “contribute to bringing the China-Japan relations back to the right track,” its Foreign Ministry spokesperson told reporters on Oct. 12.

It remains to be seen whether Abe’s visit will result in the “concrete resolution” of any issues between China and Japan, or if it will be “more a symbolic get-together of the Chinese and Japanese when their relations with the United States are in flux,” Teo said.

“There will not be a lot of substance to the meetings,” Michael Kovrig, North East Asia senior adviser at the International Crisis Group, told Caixin. Instead, the key thing to look for will be tone. “If the tone is positive, that will move negotiations forward, and encourage people to invest, trade and visit,” he said.

Jason Tan contributed the timeline text for this article.