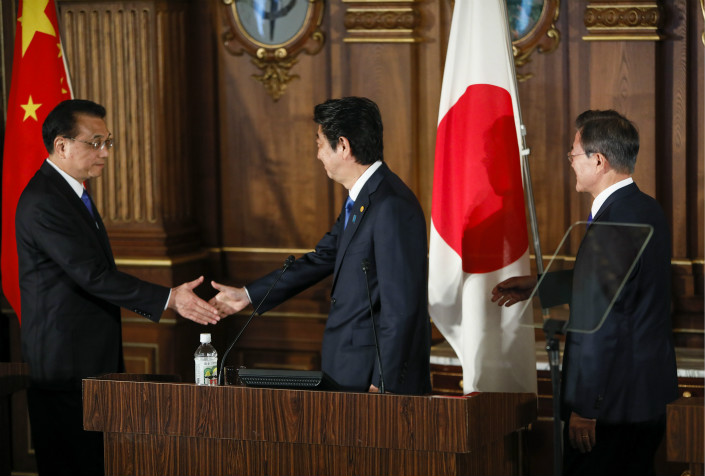 Chinese Premier Li Keqiang called on Wednesday for Sino-Japanese relations to get back on track during his long-awaited official visit to Tokyo.

Li’s visit marks the first official trip to Japan by a Chinese premier in eight years.

In addition, the two countries will also be negotiating a bilateral currency swap agreement.

In addition to meeting Japanese Prime Minister Shinzo Abe, Li, who will stay in Japan until Friday, is also attending the trilateral talks between China, Japan and South Korea on Wednesday. The trilateral talks, the first such meetings in over two years, are focused on the security situation on the Korean Peninsula.

Relations between Japan and China, which deteriorated over the past decade due to territorial disputes and Japan’s moves to increase the scope of its military, have been recovering with noticeable momentum since mid-2017.

Tensions between the two countries increased between 2012 and 2014, when Japan purchased a number of uninhabited East China Sea islands, which China views as Chinese territory. China protested the move and continued to use the airspace and waters surrounding the islands for military activities. The two countries eventually reached a four-point agreement in November 2014. However, it did not include a consensus on ownership of the islands, but rather a promise to rebuild relations and establish crisis management mechanisms.

Animosity between Japan and China continued to grow when the former passed legislation in 2015 that allowed the Japanese military — for the first time since the end of the World War II — to fight in wars overseas. China, which was under Japanese occupation in the 1930s and 1940s, saw the change as provocative and detrimental to regional stability.

However, amid recent uncertainty over U.S. President Donald Trump’s policy toward Asia, the potential for a trade conflict between Japan and the U.S., and the escalating tensions on the Korean Peninsula, Japan has come to realize that “nothing good will come out of continued antagonism toward China,” Hiroko Maeda, a China researcher at the PHP Institute, an independent Japanese think tank, told Caixin.

Since Chinese President Xi Jinping’s May 2017 meeting with Toshihiro Nikai, the secretary-general of Japan’s ruling Liberal Democratic Party, Japan has expressed increasing support for China’s Belt and Road Initiative. In March, Japan announced that it will provide financial support for the international infrastructure development project, although it is still unsure about joining the China-led Asian Infrastructure Investment Bank.

While Japan has always maintained an open attitude toward improving Sino-Japanese relations, the Japanese are “not in a hurry” to do so, said Akio Takahara, a professor and expert on contemporary Chinese politics at the University of Tokyo.