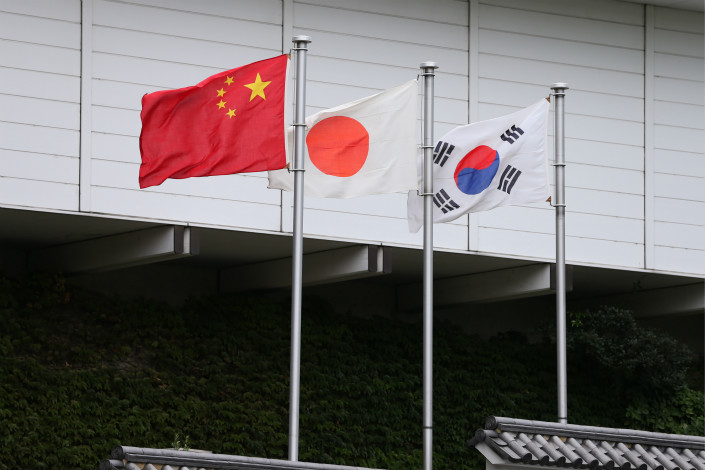 From left, the flags of China, Japan and South Korea are hoisted in Tokyo at the site of a meeting of trade ministers from the three countries in October 2016. Photo: VCG

Leaders from China, Japan, and South Korea will meet next week for their first high-level trilateral talks since 2015.

Chinese Premier Li Keqiang will attend the talks, which will be held Wednesday in Tokyo, making the meetings the first official visit by a Chinese premier to Japan in eight years, Chinese Foreign Ministry spokeswoman Hua Chunying said on Wednesday.

The talks, which will also be attended by Japanese Prime Minister Shinzo Abe and South Korean President Moon Jae-in, are expected to focus on the Korean Peninsula and result in a joint statement by the three countries calling for denuclearization of North Korea, according to a Yomiuri Shimbun newspaper report Wednesday.

The leaders will also discuss ways to strengthen cultural exchanges between the three countries, the Japanese Ministry of Foreign Affairs said in statement earlier this week.

North Korea has been the focus of much regional diplomatic activity in recent months, including a surprise visit by North Korean leader Kim Jong Un to Beijing in March, as well as the recently concluded historic inter-Korean summit between Kim and Moon. U.S. President Donald Trump is also expected to meet Kim in May.

Another major concern shared by the three countries is how to maintain the existing system of international trade amid protectionist actions by the Trump administration, analysts in Japan told Caixin. However, an official close to preparations for the trilateral talks said the three countries might not be able to reach a consensus on the proposed China-Japan-South Korea Free Trade Agreement at the upcoming meetings. There have been 13 rounds of negotiations on the trade agreement since 2013.

During Li’s visit to Japan, from Wednesday to May 11, the Chinese premier also plans to meet Emperor Akihito and visit Hokkaido, Japan’s northernmost major island.

Sino-Japanese relations have been thawing after a period of tension sparked by a dispute over islands in the East China Sea. China hopes Li’s visit will “further consolidate the improvement of Sino-Japanese relations and push bilateral relations toward the path of normal development,” Chinese Foreign Ministry spokesperson Hua said on Wednesday.