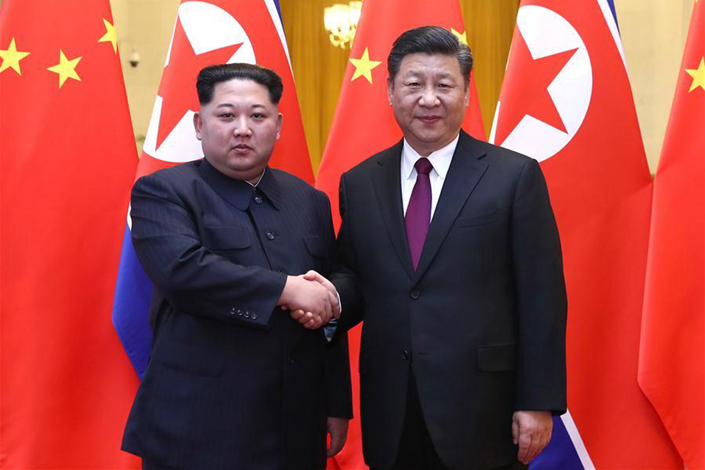 During Kim’s trip, which was initiated by Chinese President Xi Jinping, the North Korean leader said he was committed to the denuclearization of the Korean Peninsula, and open to dialogue with the United States, Xinhua reported.

“It is our consistent stand to be committed to denuclearization on the peninsula, in accordance with the will of late President Kim Il Sung and late General Secretary Kim Jong Il,” Kim said, according to Xinhua.

However, Kim gave a condition for denuclearization, saying that the issue can be resolved “if South Korea and the United States respond to our efforts with goodwill,” according to Xinhua.

Kim’s trip to Beijing, which was kept under wraps for most of its duration, comes ahead of his planned meetings with South Korean and U.S. leaders in April and May respectively.

But Hua did not confirm rumors of a visit, though China’s social media had been swarmed with sightings of a North Korean government train heading toward Beijing and video clips of a large fleet of vehicles riding through several places in Beijing in the past two days.

The Xinhua report released on Wednesday morning was the first official confirmation of Kim’s visit.

The length of the 3,400-word report was “extremely rare” for one covering the visit of a state leader, according to a social media article by the overseas edition of the People’s Daily, the Communist Party’s official newspaper.

Kim’s visit, although said to be an “unofficial visit” in the Xinhua report, came with very high-level reception, as Kim also met Chinese Premier Li Keqiang, Vice President Wang Qishan and several Politburo officials, along with Xi, according to the overseas edition article of the People’s Daily.

Kim’s visit to Beijing took place after months of tension between North Korea and China, its biggest trade partner. Over the past year, China banned imports of key goods from North Korea, including iron ore, coal and seafood, following United Nations sanctions that were applied after Pyongyang’s latest series of missile tests.

North Korea has been a close ally of China for decades. But in recent years, China has been emphasizing its “normal state-to-state relationship” with North Korea.

However, the two sides highlighted their “traditional friendship” during Xi and Kim’s meeting in Beijing. Kim also emphasized his willingness to cherish the friendship with China by choosing it as his first visit to another country (since he became North Korea’s top leader in 2012), according to Xinhua.

Kim felt there was a need to “come in time” and meet Xi this week as the “Korean Peninsula situation is developing rapidly and many important changes have taken place,” Xinhua reported.

Xi said friendship between China and North Korea “is a strategic choice and the only right choice both sides have made based on history and reality,” Xinhua reported.

Xi also said he is willing to maintain close contact with Kim through mutual visits, envoys, and exchanges of letters, according to Xinhua. Xi has not visited North Korea since he became president in 2013.

Both China and North Korea “have incentives to meet and discuss a long list of bilateral issues, but more importantly the geopolitical trends in the region and the world,” Daniel Pinkston, a nonproliferation expert and lecturer in international relations at Troy University’s South Korea campus, told Caixin. “I think both sides viewed the timing as important given the inter-Korean summit next month and the proposed U.S.-North Korea summit, possibly in May.”

Earlier this month, U.S. and South Korean officials announced that U.S. President Donald Trump had accepted Kim’s invitation to meet by May for talks on permanent denuclearization.

In response, China’s Foreign Ministry said it welcomed talks between the U.S. and North Korea, which it saw as a “positive signal.”

While the move toward dialogue between Trump and Kim came sooner than many expected, China has no reason to feel “marginalized,” as it “will surely find its own position and play its role and influence” on the North Korea nuclear issue, top Communist Party official Yu Hongjun told Caixin in an interview conducted before news broke of Kim’s visit to Beijing.

China had hosted the Six-Party Talks, aimed at peacefully resolving security concerns on the Korean peninsula, between 2003 and 2008, and has pushed for the discussions to resume after North Korea walked out of the negotiations in 2009.

Read more about the history of visits by North Korean leaders to China.