By Wang Zili and By Younghyun Jeon 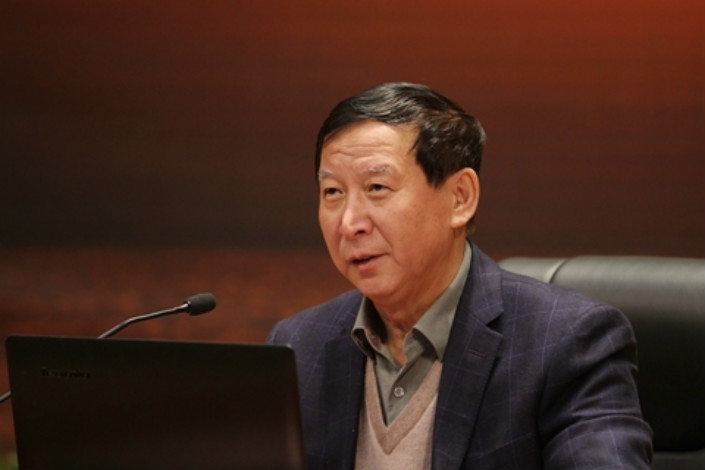 In an exclusive interview with Caixin, Yu Hongjun, former deputy minister of the International Department of the party’s Central Committee said: “The current situation is what China expected to see. The public may still feel little uncomfortable because things happened too quickly. However, China will surely find its own position and play its role and influence (in the North Korea nuclear issue).”

Yu was part of the team that guided the Chinese government’s foreign policy decisions from 2010 to 2014, and is now a member of the influential government-backed think tank Charhar Institute.

Chinese media has been discussing whether China’s interests will be overlooked since the U.S. agreed to talk to North Korea directly. If the meeting — slated for sometime in May — takes place, Trump will become the first sitting U.S. president to hold talks with a North Korean head of state.

“At present, U.S. and North Korea haven’t established diplomatic relations and still have a contentious relationship,” Yu said. “If the meeting takes place, it will be a great diplomatic achievement for Trump. ... By meeting Trump, Kim Jong Un can also break his diplomatic conventions and be able to demonstrate that he is an open, creative and dynamic leader.”

Meanwhile, China, Japan and South Korea have agreed “in principle” to hold a trilateral summit in early May in the run-up to the historic meeting, according to the South China Morning Post. There is also a South-North Korea summit planned for late April.

“If the situation continues to improve, and North Korea promises to denuclearize in exchange for help from the U.S., then sanctions may be eased,” said Yu. “Once sanctions begin to relax, China should also resume its trade relations with North Korea step by step…In the long run, it will also benefit the development of the Doman River basin and Northeast China, as well as Russia. The development of these areas requires tapping into North Korea's labor force.”

Yu Hongjun spoke to Caixin about what triggered the dramatic change in the course of events in the Korean Peninsula, what the Kim-Trump meeting means for China, and how China can continue to play a role in pushing North Korea to give up its nuclear ambitions. The following are translated excerpts of the Chinese-language interview.

Caixin: How do you view the major changes in the situation on the Korean Peninsula? Where did this dramatic change come from?

Yu Hongjun: Recent developments on the peninsula are indeed somewhat beyond our imagination. However, these positive changes are the common result of all parties’ combined efforts. It may seem sudden, but it’s inevitable and reasonable.

From the perspective of the United States, Trump has repeatedly stated that he is willing to meet with North Korean leader Kim Jong Un even during his election campaign. Trump had two attitudes about North Korea’s nuclear issue from the very beginning: They continued to inflict strong pressure, and even threaten and intimidate North Korea. On the other hand, it always had an open mind.

After South Korean President Moon Jae-in was elected in May 2017, he immediately gave a positive and friendly signal to North Korea, which is very different from the policies of the previous two conservative governments. Maybe North Korea interpreted these signals positively too.

As the U.S. continues to impose pressure, the international community’s efforts to enforce sanctions on North Korea are also increasing. Regardless of developments in China-North Korea relations, China has been consistent in its position. China has insisted on the denuclearization of the peninsula, and been committed to implementing U.N. sanctions against North Korea. China’s clear-cut attitude is also one of the factors that has pushed North Korea to change its tone and meet the demands of the international community.

From North Korea's perspective, their announcements and statements in recent years have been quite contradictory: On one hand, it enshrined owning nuclear weapons into its constitution; On the other hand, it also mentioned several times that denuclearization was the nation's will as per declarations by the current North Korean leader’s father and grandfather. For example, denuclearization is seen as the political legacy of Kim Il Sung.

But the key question is: When will North Korea take action? It depends on what kind of methods it considers to be more effective in maintaining its own national security and institutional security.

More than two decades since the end of the Cold War, the international community has undergone tremendous changes. In particular, recent developments in the Middle East and North Africa have made North Korea realize they can’t compete with the U.S. or South Korea without having its own trump card. Therefore, it chose to overcome its difficulties, withstand pressure, and do everything possible to get nuclear weapons and launch ballistic missiles.

Now it can be said that North Korea has basically achieved its goal, and its nuclear weapons program poses a substantial threat to the U.S. Under such circumstances, North Korea can now breathe a sigh of relief and take a step toward easing tensions. It can now bargain with the U.S. from a position of strength.

Also, it may not be technically feasible for North Korea to continue to conduct frequent nuclear tests. From an economic point of view, the development of a country should not rely on military strength alone, but on economic and social development. The current international sanctions, including the U.N. Security Council sanctions that both China and Russia are in favor of, have made it increasingly difficult for North Korea to sustain its momentum.

What’s the significance of the North and South Korea summit, and U.S.-North Korea summit? What are the possible outcomes of these two meetings?

The upcoming summit between the two Koreas is the third North-South leaders’ meeting since the Korean Peninsula split more than 70 years ago. Its significance should not be underestimated. Although it cannot be said that the tensions on the peninsula would be eased immediately after the meeting, the South Korean government should further open up to the north and provide North Korea with more materials and support. After the meeting, the two parties may also make specific arrangements on the reunion of separated families and the restoration of the Kaesong Industrial Complex (the last remaining economic cooperation project between the two Koreas.) By doing so, it will help improve the prestige of Moon’s government and have a positive impact on the situation on the peninsula.

As for the U.S.-North Korea meeting, it is even more significant. At present, U.S. and North Korea haven’t established diplomatic relations and still have a contentious relationship. If the meeting takes place, it will be a great diplomatic achievement for Trump. North Korea can also change the stereotypes about it held by the international community. By meeting Trump, Kim Jong Un can also break his diplomatic conventions and is able to demonstrate that he is an open, creative and dynamic leader.

Therefore, the meeting between Trump and Kim Jong Un is likely to change the geopolitical structure and security situation of Northeast Asia, and even rewrite the national interest framework of all parties. Of course, Trump and Kim Jung Un’s meeting cannot be ruled out, but the possibility of postponing at the last minute might exist. However, judging from the current situation, if the North-South meeting can be successfully held, the U.S.-North Korea meeting will naturally be held in due course as well.

The relationship between China, U.S., and North Korea isn’t the same as the one that existed between China, the United States and the Soviet Union. The former only involves the Northeast Asia region, while the latter influenced global strategic alliances.

But the relationship between China and North Korea is extremely special. The two sides depend on each other, and there are numerous historical links that have helped cement their relationship. China and North Korea fought against Japanese occupation together and fought side-by-side in the Korean War in the 1950s. Therefore, it’s not excessive to describe ties between the two countries as a "complementary relationship.” After the end of the Cold War, the economic and political relations between the two countries have become closer than other countries over the past two decades.

In fact, after the end of the Cold War, the pattern of “China and the Soviet Union supporting North Korea, while Japan and the U.S. supported South Korea” has been broken. In particular, after China and Russia formally recognized both North and South Korea, they have moved away from the Cold War mentality. However, the U.S. has not recognized the legitimacy of the North Korean government until now. Therefore, to a large extent, the factors that led to the crisis on the Korean Peninsula still exist, and the responsibility is indeed on the U.S. to help resolve it.

The lack of real practical dialogue between two countries had made China may feel disappointed and marginalized, because China’s strategic position takes into account the long-term interest and fundamental interests of our country. China should be happy about the recent developments in Northeast Asia.

Second, the Chinese side has to also actively promote the momentum that is being built up. China should actively participate in resolving North Korea’s nuclear issue and eventually solve the problem through a multilateral approach, because this involves not only the interests of two countries (North Korea and U.S.), but also the interests of many countries in Northeast Asia. The Chinese side should also actively use the U.N. Security Council to promote efforts that will benefit all parties.

The Chinese side should push North Korea to join the international nuclear non-proliferation treaty. In the process of resolving issues through the multilateral framework of the U.N., China will continue to play its role and will not be "marginalized."

Third, China must also brace itself for any fallout if things go off track.

If the situation continues to improve, and North Korea promises to denuclearize in exchange for help from the U.S., then sanctions may be eased. Once the sanctions begin to relax, China should also resume its trade relations with North Korea step by step. This will contribute to the stability of the North Korean regime and the situation on the peninsula. It will also facilitate the formation of new economic and trade relations and pragmatic ways for bilateral cooperation. In the long run, it will also benefit the development of the Doman River basin and Northeast China, as well as Russia. The development of these areas requires tapping into North Korea's labor force. The trilateral economic cooperation between China, North and South Korea, or between China, North Korea and Russia, will also have to be broadened in future.

There is no need to feel that "China is marginalized." The current situation is what China expected to see. The masses may still seem a little uncomfortable with it because it happened too quickly. However, China will surely find its own position and play its role and influence (the issue) in an appropriate manner.