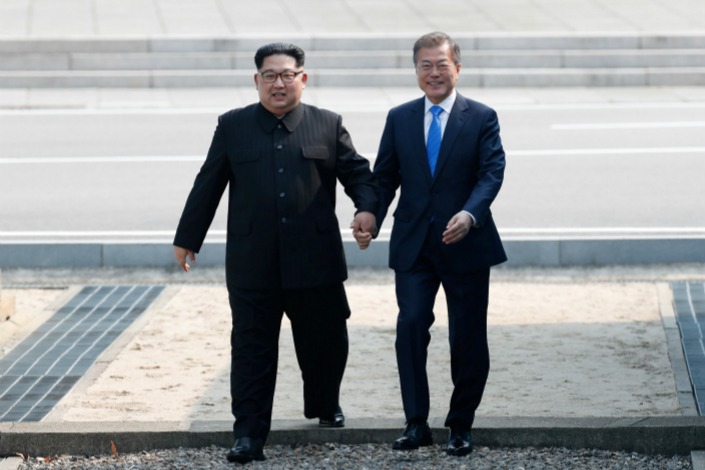 (Beijing) — North Korea and South Korea have agreed to more talks on a wide range of issues, including a possible peace treaty, at the end of a historic summit in the truce village of Panmunjom on Friday.

In a joint statement released late in the day, both countries announced that all propaganda activities will be halted from Tuesday. South Korean President Moon Jae-in will visit Pyongyang in the autumn to match the one-day visit to the south by North Korean leader Kim Jong Un.

For the historic meeting with his South Korean counterpart, Kim crossed the demarcation line in the demilitarized zone separating the two countries. The visit marked the first such crossing made by any top North Korea leader.

“He would open-heartedly discuss with Moon Jae-in all the issues arising in improving inter-Korean relations and achieving peace, prosperity and reunification of the Korean peninsula,” North Korea’s official Korean Central News Agency said.

“A new history starts now. An age of peace, from the starting point of history,” Kim wrote in Korean in a guest book in the South’s Peace House before talks began, Reuters reported.

“I hope to write a new chapter between us, this is the starting point for us. We will make a new beginning,” Kim was quoted by the Guardian newspaper as saying.

In an improvised move, Kim invited Moon to step briefly into North Korea. He then re-entered the south while holding hands with his South Korean counterpart.

“Your visit makes the military demarcation line a symbol of peace, not division,” Moon was quoted by the Guardian as saying. “I thank you very much for your courage and we will finally have the dialogue we haven’t been able to have for the past decade.”

One section of the joint statement refers to denuclearization, but it only repeats the general idea that the South and North have confirmed their common goal of realizing a nuclear-free Korean Peninsula, according to the Guardian.

The inter-Korean summit came just a month after Kim visited Beijing in his first trip outside his country during six years in power.

In his meeting with Chinese President Xi Jinping, the North Korean leader said he was committed to the denuclearization of the Korean Peninsula.

In response to the meeting, China’s Ministry of Foreign Affairs said Friday that the government applauded the historic step that the leaders of both countries have taken.

“Through the ups and downs, we are still brothers. A smile when we meet does away with all grudges,” said ministry spokeswoman Hua Chunying, citing Chinese literary giant Lu Xun. “We hope that both sides will take the historic meeting at Panmunjom as an opportunity to start a new journey toward long-lasting peace and stability on the Korean Peninsula.”