Fukuda: China, U.S. Can Talk Out Their Problems 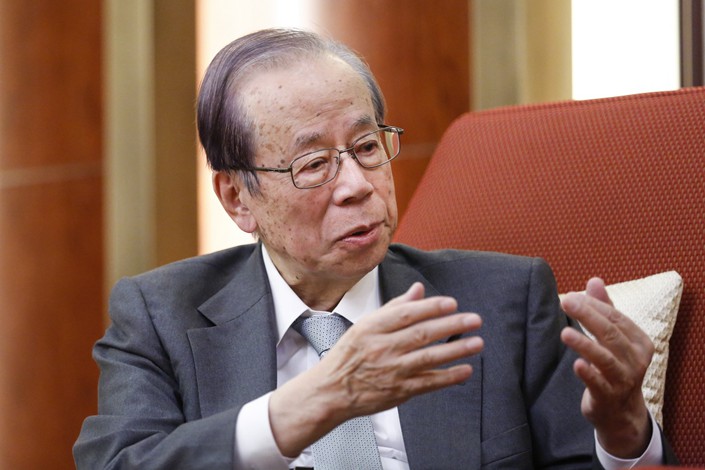 (China Watch) — Chinese leaders and Japanese Prime Minister Shinzo Abe are expected to chart a new course for the bilateral relationship amid a complicated global situation during the latter's visit to China this month, the former Japanese prime minister Yasuo Fukuda says.

This year marks the 40th anniversary of the signing of the China-Japan Treaty of Peace and Friendship, and of China’s reform and opening-up.

Beijing announced Abe’s visit on Friday, the first by a Japanese prime minister in seven years, from Oct. 25 to 27. President Xi Jinping met Abe in Russia in September, and Premier Li Keqiang made an official visit to Japan in May.

Fukuda, talking to China Watch, forecast that “a chance still exists” that the worsening trade friction between China and the United States will ease.

During Abe’s visit, talks are expected to touch on “various important issues”, said Fukuda during an interview in Beijing on the sidelines of the fourth round of dialogue between Chinese and Japanese entrepreneurs and former high-level officials.

“The basic theme should be in what direction cooperation between Japan and China will develop,” he said.

Fukuda, a longtime bridge-builder between China and Japan, said the direction of the relationship will be important not only for China and Japan but also for all countries in East Asia and the rest of the world.

Here is the full text of the interview:

Q: This year marks the 40th anniversary of China’s reform and opening up, accompanied by the 40th anniversary of Treaty of Peace and Friendship between Japan and China. What do you think about China’s reform and opening up over the years? With Prime Minister Abe visiting China shortly, what do you foresee for Sino-Japan relations?

A: The Treaty of Peace and Friendship was signed 40 years ago. At the time, although it was signed in Beijing, the treaty still needed to go through the approval process in Japan. It was not valid until the completion of the corresponding procedures to deposit the instruments of ratification. Therefore, it can be seen that the treaty came into force when the two sides exchanged the approval letter.

In order to exchange this document, Deng Xiaoping came to Japan with his wife, and an exchange ceremony was held, which I attended. Deng took action immediately after the treaty came into force. He visited international companies in Japan, met company heads and raised hopes that there could be collaboration, and he reached agreements. The two decision-makers of Japan’s representative companies, Nippon Steel and Matsushita Electric, warmly accepted Deng’s invitation of collaboration and in turn promised maximum cooperation.

China’s reform and opening up has made substantial progress since then.

There is no doubt that Deng did a particularly important job in Japan. And this ought to be commemorated not only as a beginning to reform and opening up, but also for pushing it into a substantive implementation stage. So from our perspective what he achieved was remarkable.

These large Japanese companies also honored their promises and translated the agreements into action. We believe all of this played a critical role getting China’s reform and opening up underway. For 40 years since then China has adhered to such a policy and has continuously promoted the process of reform and opening up to become the world’s second-largest economy. So I believe the treaty signed between the two countries 40 years ago is of great significance.

So is the visit of Prime Minister Abe. In terms of his coming trip to China, I think that in talks between him and President Xi Jinping important issues will be discussed. The basic theme should be in what direction collaboration between Japan and China will go. This issue is of course crucial for the two sides, and agreement on it affects not only Japan and China, but other countries in Northeast Asia as well. Thus it has a great impact on the whole of Asia. In my view the China-Japan relationship is critical to the overall stability of Asia. This visit should be a process of confirming that recognition, in which there is symbolic meaning.

A: It is amazing that China has grown so rapidly. From the perspective of the economy as a whole, it has developed into a very large country in a short time. However, some problems have also been encountered.

For example, President Xi has said the challenge now is to enhance overall quality. Last year, at the Party Congress, the goal was to improve the living standards of each citizen. This should be what China deals with now, and the direction of development in the future as well. It is possible that everyone is able to experience and witness this evolution. China’s central and western regions and rural areas will progressively thrive before long, which is desirable and deserves attention.

We understand the goal of China’s development and its implications. From a Japanese perspective this kind of trend is understandable. For instance, in order to improve quality we hope to be supportive from a variety of angles that are closely related to everyday life. So we need to continue concentrating on certain areas for China to achieve a more robust economy.

Q: The Sino-U.S. relationship has become more complicated this year. As a politician known internationally, how do you think this can be dealt with? As the world’s three most important economies, in what way do you think the U.S., China and Japan should work together? And what kind of influence do you think Sino-Japan collaboration has on the prosperity of the Asian-Pacific region?

A: Based on the status quo, the friction between China and the U.S. should be viewed as a trade war, with both sides at loggerheads. But if the aim is to remain level-headed and look for solutions, all they can do is sit down and talk with each other and not ignore the problem. Of course, no one really wants a fight. If you don't want to step into war, you are supposed to stay patient and go back to the negotiating table. It may be that the problem cannot be totally resolved immediately and needs many rounds of talks. Tremendous patience is likely to be needed in such a process. Moreover, the negative impact of such a process on other countries should be minimized, and a sense of responsibility should drive the will to talk and negotiate.

I hope the leaders of both the U.S. and China are now reflecting on the influence any dispute between them has on other countries. Of course, we very much hope for a good outcome as soon as possible through dialogue. The possibilities for that still exist.

There may be meetings in Argentina next month, but progress before that would be better. Telephone calls and video conferencing make things very easy. I hope everything will be done as soon as possible in the search for a solution.

In relation to the triangular relationship between Japan, the U.S. and China, as you know, these countries together account for 40 percent of the world economy, and it is certainly no good for there to be disputes, which could even lead to a global economic collapse.

From that point of view the three countries need to maintain good communication and work with one another daily. They need to constantly communicate to ensure that world economic stability is maintained.

In this context, when we look at the economic share of the two countries from the perspective of Japan and China alone, if the two can maintain economic stability, then the rest of Asia may gain in confidence as well. If tension emerges between Japan and China, then Asian countries will start to nurse fears. We should not strike fear into anyone.

So I believe that against that backdrop there is no confrontation between Japan and China. We need to act in a way that pays heed to the influence of what we do on the world and our neighbors. In that regard the relationship between the U.S. and China is critical. China and the U.S. also need to pursue detente and maintain good relations that benefit the whole world.

This article was originally published by China Watch.