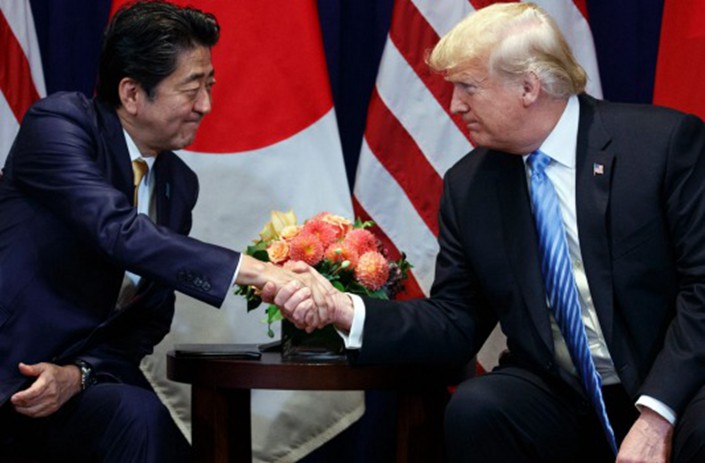 (AFR) — Japan is trying to steer a course through the economic and national security minefield between the United States and China.

After stalling for more than 18 months, Tokyo late last month acquiesced to U.S. demands for bilateral trade negotiations. It’s a defensive move aimed at staving off U.S. Section 232 tariffs on Japanese automobiles — under the guise of U.S. national security concerns — that would hit hard Japan’s most important and internationally competitive industry. Abe appears to have secured a stay on those tariffs in his recent meeting with Trump.

The risks and difficulties of negotiating with Trump are clear. Canada and Mexico only just managed to keep NAFTA intact against the forces of the US’s divide-and-rule tactics involving untenable bilateral demands. South Korea, too, was forced to renegotiate the KORUS free trade agreement on inequitable terms, under pressure from the U.S. over peace efforts on the peninsula.

Japan has declared it will limit opening up sensitive sectors to the levels of market access earlier agreed with the U.S. under Trans-Pacific Partnership (TPP) negotiations. The Japanese aim to induce the U.S. back to the TPP. This is unlikely to succeed, but it might well save the bilateral relationship. Failed negotiations could result in U.S. tariffs on Japanese cars and car parts, or worse. Trump has cast doubt over the U.S. security umbrella under which Japan shelters, and which is being used as economic leverage under his unpredictable leadership.

Trump has succeeded in dealing bilaterally with countries as he forces them to choose between U.S. markets access or multilateral trade. The only chance of resisting the march toward managed, discriminatory trade is for the rest of the world to stand up to Washington’s assault on global institutions, rules and openness. There are some signs of countries working together towards that objective, such as German Chancellor Angela Merkel’s pressure on Trump at the G7 meeting in June. Japan’s leadership in concluding the TPP without the U.S. was also an important moment.

But much more will need to be done to defend multilateralism.

Abe arrives in Beijing next week with a large business delegation on his mission to restore normalcy in Japan’s relationship with China. All eyes will be on what the immediate pay off from this improvement might be. If the visit succeeds, we could see joint Chinese-Japanese infrastructure investment projects in Southeast Asia and beyond. There are dozens of projects under consideration by the two countries. Giving some the go-ahead would be a game changer, not only in terms of benefits for Japanese business, but in terms of what it signals about Chinese intentions to play the multilateral economic game.

China’s Belt and Road Initiative will likely be the largest rollout of foreign infrastructure investment ever. It brings with it major risks for all involved and China has already experienced reputational and geopolitical damage from failed projects.

Japan has trouble with its investment push three or four decades ago. Former Japanese prime minister Kakuei Tanaka was famously trapped in large-scale protests in Indonesia in the mid-1970s as Japan’s footprints abroad stepped on foreign political toes.

In managing its initiatives with China and the U.S., Japan has carefully cleared the pathway with the U.S. The U.S.-Japan-Australia agreement for infrastructure investment in third country markets is replicated in the agreement that Japan seeks in cooperation with China, although the stakes are much higher.

For China, there is growing acknowledgement of the limits to transactional dealings with Trump. The trade deal that Beijing believed the United States had asked for was rejected earlier in the year. The worry is that, rather than dealing China in on whatever terms, the Trump administration is now set on a course to block its inexorable rise.

Chinese President Xi Jinping is expected to reciprocate Abe’s trip to Beijing with a visit to Japan early next year. The economic interdependence between China and Japan meant improved relations were inevitable at some point, but the uncertainty in global economic policy has pressured both Tokyo and Beijing to accelerate all that.

These summit meetings are a welcome development for a region and global economy in need of steadying diplomacy. The two Asian neighbors share one of the largest trade relationships in the world. They have no bilateral agreement that covers their contemporary engagement, which is fundamentally anchored in the international rules of the WTO that Trump’s “America First” agenda threatens to undermine.

These two unlikely partners in Asia might yet be the best hope of holding the line against Trump’s assault on the global trading system.

Shiro Armstrong is Director of the Australia–Japan Research Centre in the Crawford School of Public Policy at the ANU.