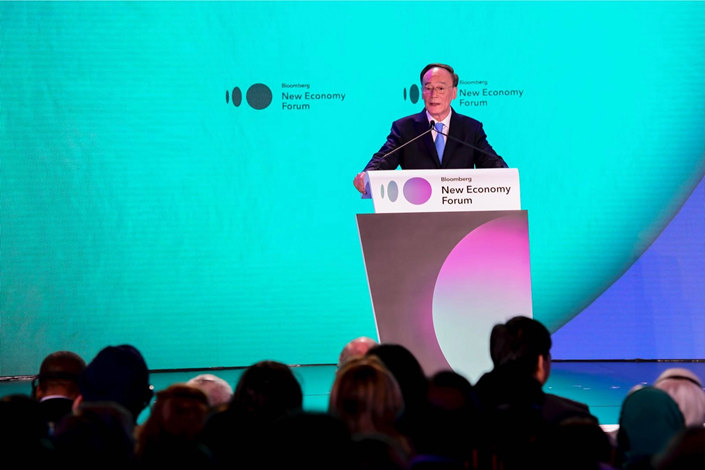 China is willing to negotiate with the U.S. on issues of mutual concern, and push for a “mutually acceptable” resolution to their economic and trade issues, Vice President Wang Qishan said Tuesday.

Wang made the speech at the Bloomberg New Economy Forum in Singapore, ahead of a potential meeting between President Xi Jinping and U.S. President Donald Trump on the sidelines of the Group of 20 summit in Argentina’s capital Buenos Aires at the end of November.

The two countries have held several rounds of talks this year, all of which failed to produce a breakthrough in the ongoing trade war between the world’s two largest economies. Washington has imposed additional tariffs on $250 billion worth of Chinese imports since July, while Beijing has retaliated with new levies on $110 billion of U.S. goods. Overall, each side has imposed charges on half of its annual imports from the other.

China will maintain a sober-minded attitude toward Sino-U.S. economic and trade issues, Wang said. Meanwhile, “China advocates that all countries should abandon the Cold War mentality and the mindset of power politics,” and resolutely oppose unilateralism and trade protectionism, he said.

“Being negative and resentful is not conducive to resolving problems during economic globalization. Setting up barriers and initiating disputes won’t solve these countries’ own problems, but only exacerbate global turmoil,” Wang said.

The world economy is currently experiencing the most profound changes since the end of the Cold War in the early 1990s, with the system of global governance facing challenges brought by the rise of populism and unilateralism, Wang said.

Intensifying populism has been reflected in political demands in some countries, leading to the launch of unilateral anti-globalization policies, which has had a significant impact on the global political ecology, he said.

As economic globalization is not a zero-sum game, only enhancing equal consultation and cooperation on the basis of the rules-based international order can reverse divergences and solve problems, Wang said.