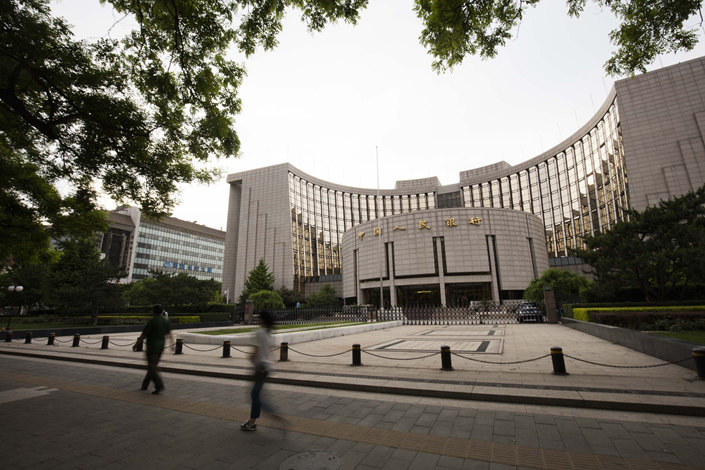 The central bank's debt sale in Hong Kong will be its second ever offshore bill issuance. Photo: VCG

China’s central bank will sell bills in Hong Kong next week, its first debt issuance in the city and a signal policymakers are stepping up efforts to support the depreciating yuan in the offshore market.

The announcement came a day after the central bank weakened the yuan’s daily reference rate to 6.9574 per dollar, its lowest level in a decade, prompting the currency to slide in onshore trading to 6.9722. The continued slump in the yuan, which began in April, has raised concerns that the central bank will allow the currency to depreciate beyond 7 to the dollar, a level that could become a trigger for speculators to bet on an even steeper decline.

By absorbing yuan funds in the offshore market, the issuance of central bank bills can reduce the amount of yuan commercial banks have available to lend, thus helping push up short-term interest rates and the cost of shorting the yuan, Zhou Hao, senior emerging markets economist at Germany-based Commerzbank, said in an opinion article (link in Chinese) published by Caixin.

PBOC Deputy Governor Pan Gongsheng made it clear to speculators on Friday that the central bank is ready for them.

“For those who are trying to short the yuan, we are very familiar with each other as we fought hand to hand a few years ago. I think it’s still fresh in our memory,” he said (link in Chinese) at a briefing in Beijing. The authorities have accumulated “rich experience” and developed many policy tools to deal with volatility in the yuan’s exchange rate, he said.

Against the backdrop of slowing domestic growth and a strengthening U.S. dollar, the yuan is moving closer to the 7-yuan-per-dollar level, a psychological threshold that’s seen as key to underpinning market confidence in the currency.

China’s economic growth for the third quarter of 2018 dipped to 6.5% amid a nationwide deleveraging campaign and an escalating trade war with the U.S., marking the weakest pace since the first quarter of 2009.

At the same time, the dollar has surged on the back of strong U.S. economic growth and a string of rate hikes by the U.S. Federal Reserve. The Dollar Index, which measures the value of the greenback against a basket of major currencies, has been on an upward trend in recent months and closed at 97.13 on Wednesday, the highest since June 2017.

The PBOC continued to weaken the onshore yuan’s daily reference rate to 6.967 per dollar on Thursday, marking its lowest level since May 2008. As the yuan is allowed to fluctuate as much as 2% either side of the reference rate, it could depreciate beyond 7 per dollar during the day’s trading.

The PBOC’s debt sale in Hong Kong will be its second ever offshore bill issuance. In 2015, it sold 5 billion yuan worth of bills in London.

In addition to the impact on the yuan’s exchange rate in Hong Kong, the issuance of PBOC bills in the city will also help build a yield curve for yuan-denominated bonds in the offshore market, a point (link in Chinese) the central bank has made previously.

Paul Chan, Hong Kong’s Financial Secretary, said in a statement that the city welcomes the PBOC’s bill sale which will facilitate the development of Hong Kong’s debt market and reinforce the city’s status as a global offshore yuan business hub.

The city’s authorities will look at the possibility of adding PBOC bills to the list of securities eligible for exemption from profits tax, he said. Currently, exemptions only apply to interest income or trading profits on sovereign bonds issued by China’s central government.