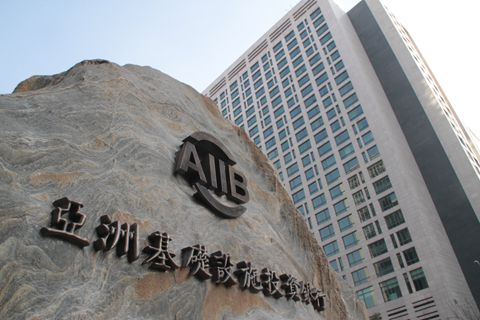 The China-backed Asian Infrastructure Investment Bank (AIIB) invested $4.2 billion in projects and funds last year in a push to expand its global footprint, according to the bank’s annual report published Friday.

Established in 2015 with $100 billion of authorized share capital, the AIIB is the first China-led multilateral development lender, aiming to play a role similar to those of the World Bank and the Asian Development Bank (ADB) in funding development projects.

The AIIB’s 2017 investments surged 150% from 2016, its first year of operations. The bank approved 23 energy, transport and other infrastructure projects last year in countries such as India, Egypt and the Philippines, according to the report.

The bank has been making investments quickly since it approved its first batch of loans to projects in Bangladesh, Indonesia, Pakistan and Tajikistan in June 2016. Eight projects were approved in its first year. In comparison, the ADB and the European Bank for Reconstruction and Development (EBRD) didn’t make their first loans until two years after they were founded.

“With its second year of operations completed, AIIB has been emerging from an idea into its own reality,” said AIIB President Jin Liqun in the report. “We will continue to balance our investments among a whole range of sectors and countries. Our continued focus on Asia will not compromise our efforts to care for nonregional members.

The AIIB had 86 members by the end of 2017, an increase from the 57 founding members at the end of 2016. China is the largest shareholder with 31%, followed by India and Russia, according to the bank’s latest data.

The bank last year received the highest credit ratings from the three biggest rating companies – Moody’s, Fitch Ratings and Standard and Poor’s – paving the way for it to raise money via international bond sales. The AIIB said in January that it may issue its first U.S. dollar-denominated bonds to raise at least $1 billion as soon as the end of June.

The multilateral bank’s net income rose to $252 million in 2017 from $167 million a year earlier, according to the report. Its paid-in capital totaled $19 billion at the end of last year, it said.

The AIIB will focus on developing economies in Asia but will extend investments beyond the region for opportunities that support connectivity, promote the global public good and are close to Asia, the bank said. The AIIB said it expects Asia’s infrastructure funding needs to be $1.7 trillion a year until 2030.

The bank will hold its annual meeting in Mumbai, India, next Monday and Tuesday. The theme for this year's two-day meeting is “Mobilizing Finance for Infrastructure: Innovation and Collaboration.”