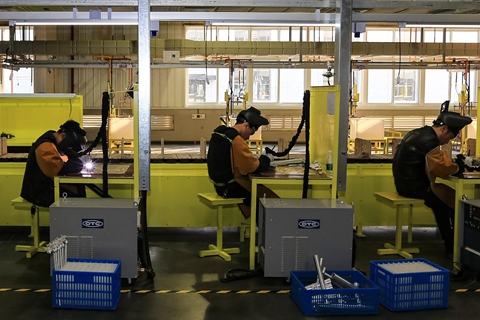 * Courts should stick to the principle of presumption of innocence and be cautious in ruling on economic disputes as crimes, top court says

China’s top court Monday promised greater legal protections for private businesses and property rights following the central government’s call to empower the private sector in a bid to shore up a cooling economy.

The Supreme People’s Court ordered the judiciary system to strengthen protection of private property rights, safeguard legal rights of private entrepreneurs and create a fair legal environment. The court also moved to correct past judicial rulings in which private businesses or individual assets may have been wrongfully expropriated, according to a statement published on the top court’s website after a Monday meeting of top judicial officials.

Private enterprises are a major pillar of the world’s second-largest economy. As of the end last year, more than 27 million private companies accounted for half of the country’s tax revenue, 60% of gross domestic product and 80% of urban employment.

But private companies have long been in a unfavorable position compared with state-backed rivals in term of market access, financing availability and asset protection.

The central government has stepped up rule-based protection of private businesses over the past few years amid concerns over a withering of the private sector.

In 2016, China issued its first state-level guidelines to map out policies to protect property owners, including private entrepreneurs and ordinary homeowners, and pointed to a more lenient attitude toward questionable business practices in the early days when China’s legal system was under development.

In following months, the Supreme Court issued documents establishing the legal groundwork for property-rights protection, ordered the retrial of controversial cases involving private assets, and called for caution in any future law enforcement actions that involve the freezing, seizing or auctioning of property.

At the Monday meeting, the top court repeated its determination to ensure fair legal rights for private businesses and entrepreneurs. The court said all market entities should be treated equally in court cases. Courts should stick to the principle of presumption of innocence and be cautious in ruling on economic disputes as crimes, according to the statement.

Judicial officials should further clarify laws and interpretations and remove outdated articles that may hurt the rights of the private economy. A legal framework should be set up to help private businesses resolve disputes related to shares pledged for loans, financing and private properties, according to the statement.

The top court also called for improvements in the enforcement of bankruptcy law and anti-trust law to protect private assets and allow businesses to thrive.

Property-rights violations have long been a serious concern among China’s private entrepreneurs. A few years ago in the western Chinese city of Chongqing — at the time under since-disgraced regional Party Secretary Bo Xilai — the assets of many private entrepreneurs were seized in the name of a “crackdown on crime” after false criminal charges were leveled against them.

It has been common practice in China for law enforcement departments to freeze and seize personal assets of suspects involved in criminal cases before a court verdict. Private and business assets linked to criminal cases are usually sold at auction by authorities, sometimes for far less than their market value.

In 2013, Hunan businessman Zeng Chengjie was executed after being convicted of illegally raising about 3.4 billion yuan ($493 million). Zeng’s lawyer said Zeng’s real estate development company, which was appraised at 4 billion yuan, was sold by the local government to a state-owned company for 380 million yuan. Two years after Zeng’s execution, fundraising fraud was removed from the list of crimes punishable by death in China.

Last year, the public security department of Liaoning Province offered 679 million yuan in state compensation to Yuan Chengjia, a businessman sentenced in 2014 to 20 years in prison for “mafia-style” crimes. Yuan demanded 3.73 billion yuan in compensation from the local government for losses linked to asset seizures before the conviction. Police took away property and funds belonging to more than a dozen family-run businesses in Liaoning, as well as bank savings and more than 30 vehicles before the guilty verdict, according to Yuan.

The top court said Monday that it will continue efforts to review controversial cases involving private assets and correct the ones that have been improperly handled.