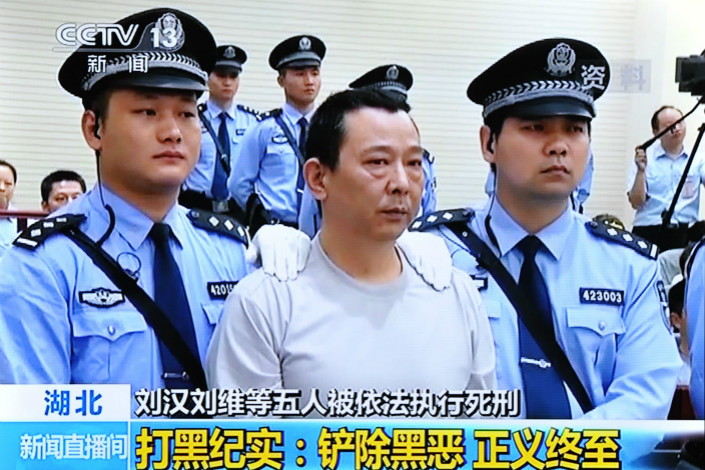 Liu Han, chairman of Hanlong Group in Sichuan province, was sentenced to death in May 2014 after being convicted of organized crime and murder. Authorities shut down Liu’s business and seized his personal assets, even though only 20% were linked to his crimes, according to his lawyer. Photo: IC

Beijing has pledged to better protect the personal assets of people being investigated or prosecuted for economic crimes in order to ease private sector fears over a lack of safeguards for personal security and wealth.

Police mustn’t dispose of assets owned by individuals who are under investigation or facing trial before they are convicted of business-related crimes such as embezzlement, bribery and fraud, according to a set of guidelines released Tuesday by the top prosecutor’s office and the Ministry of Public Security.

Investigators should also draw a clear line dividing ill-gotten gains and wealth amassed through legitimate means and differentiate between assets owned by suspects and those belonging to their families, according to the joint guidelines.

The document was drafted in accordance with a series of resolutions and recommendations from the ruling Communist Party issued over the past five years aimed at strengthening legal protections to support economic reform and entrepreneurship, according to JCRB.com, a news site affiliated with the top prosecutor’s office.

The guidelines came less than a week after the top prosecutor’s office, or the Supreme People’s Procuratorate, called for leniency toward those who “passively pay bribes.”

In a directive aimed at “strengthening a sense of personal and wealth security among entrepreneurs,” the top prosecutor’s office last week proposed lighter sentences for business owners who are forced to “involuntarily bribe” public officials who demand money in return for favors.

Prosecutors should also take into account whether those under investigation for alleged economic crimes have actively cooperated with corruption investigations, according to the directive. It calls upon prosecutors to play a role in creating a “proper environment for legitimate rights of businesspeople and their entrepreneurial innovations.”

The new guidelines and directives reemphasize principals that are already embedded in Chinese law, but may have been overlooked by law enforcement officials in the past.

The top prosecutor’s office didn’t offer any specific examples of cases linked to alleged economic crimes where due process wasn’t carried out.

However, several high-profile cases in which law enforcement authorities seized individual assets or forced businesses to dissolve prior to a guilty verdict have rattled the business community in recent years.

Yuan Chengjia, sentenced to 20 years in prison for “mafia-style” crimes in 2014, has been demanding 3.73 billion yuan ($564.3 million) in compensation from the local government for losses linked to asset seizures by police prior to the conviction. Police took away property and funds belonging to more than a dozen family-run businesses in the northern province of Liaoning, as well as bank savings and more than 30 vehicles before the guilty verdict, according to Yuan.

In September, the public security department of Liaoning awarded him 679 million yuan in state compensation for the losses, China Radio International reported.

In another high-profile case, Liu Han, owner of Hanlong Group that was once the biggest private enterprise in southwestern Sichuan province, had his business closed and all his assets confiscated, even though only 20% of them were linked to his crimes, according to his lawyer. Liu was executed in 2015 for engaging in organized crime.