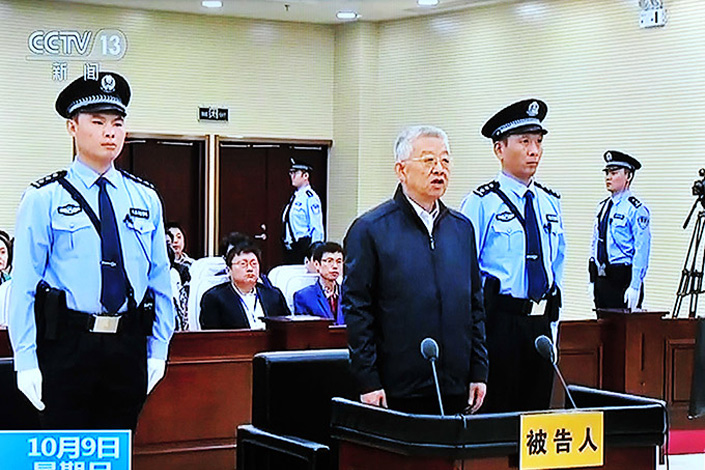 A CCTV screen grab shows Bai Enpei, the former Communist Party head of Yunnan province, standing trial at a court in Anyang, in central China's Henan province on Oct. 9 on corruption charges. Bai was convicted of accepting 246 million yuan ($35.5 million) in bribes and sentenced to death with a two-year reprieve. Photo: IC

A little more than two years later, fundraising fraud — which can occur in illegal activities such as Ponzi schemes or legal products such as P2P lending or wealth management products — was removed from the list of crimes punishable by death in China.

Zeng’s is one of the cases most cited by legal experts who are calling for reduced use of the death penalty, especially for economic offenses such as fraud, bribery, embezzlement and smuggling. China, among dozens of countries that have retained capital punishment, is facing increasing international and domestic pressure over its widespread use of the death penalty.

Although the number of executions in China is a closely guarded state secret, academics estimate that the annual total is in the thousands, down from the tens of thousands before procedural changes in 2007. China’s number of executions is several orders of magnitude greater than that of other large countries, including India and the U.S.

Public attitudes are split on the death penalty. Since President Xi Jinping initiated a corruption crackdown in late 2012, debates have raged on how harshly to punish corrupt officials.

Many argue that crooked officials should face penalties that include execution to help rein in widespread corruption. Zhao Baocheng, a law professor at China University of Political Science and Law, told Caixin that corruption and bribery not only cause financial and political losses but may also lead indirectly to fatalities among ordinary people.

“Almost every deadly accident caused by work safety flaws is linked to corrupt officials,” he said.

But many other legal experts urge dropping capital punishment for nonviolent economic crimes including corruption and bribery. The case of Zhejiang businesswoman Wu Ying in 2009 ignited a public outcry after she was sentenced to death for financial fraud involving 380 million yuan raised from public investors.

People criticized the court for being too harsh on private entrepreneurs. In 2012, Wu’s sentence was overturned by the Supreme People’s Court and reduced to death with a two-year reprieve. That was later commuted to life imprisonment.

In practice, the death penalty has rarely been imposed on high-level officials in recent years. In 2011, former Suzhou Mayor Jiang Renjie was executed for embezzlement and taking 82.5 million yuan in bribes. That same year, Xu Maiyong, a former mayor of Hangzhou who was convicted of taking more than 160 million yuan in bribes, was also executed. No other corrupt official has been reported executed since then.

A Caixin estimate based on state media reports and government announcements found that as of December, 26 provincial-level officials received sentences during the graft crackdown since late 2012. Two of them — former Yunnan province party head Bai Enpei and former Guangdong party head Zhu Mingguo — were sentenced to death last year with two-year reprieves. Nine others, including former security czar Zhou Yongkang, were sentenced to life in prison.

In China, senior officials who received reprieved death sentences can usually have their punishment commuted to life in prison after two years. Many of them can then get their jail terms reduced, or get out of prison for health reasons, fueling public discontent.

“Some judicial departments have been too lenient in granting reduced sentences and bail to corrupt officials, allowing some officials who received life sentences to skirt their jail terms,” said Zhao Bingzhi, a criminal law professor at Beijing Normal University. As China gradually reduces the use of the death penalty, reprieved death sentences should be carried out more strictly to properly punish criminals, Zhao said.

In November 2015, a new amendment to the Criminal Law specified sentencing based on the severity of the crime. The amendment specifies that officials who took especially large bribes and caused severe losses should be sentenced to life imprisonment or death. Those whose suspended death penalties are commuted to life sentences shouldn’t then have their jail terms reduced.

Within two weeks after implementation of the new Criminal Law, three officials and state company executives were given suspended death sentences. Yunnan’s Bai Enpei was convicted of taking 246 million yuan in bribes; Wei Pengyuan, former deputy director of the Coal Department at the National Energy Administration, was found to have taken bribes totaling 210 million yuan; and Yu Tieyi, a deputy general manager of a state-owned logistics company, accepted 306 million yuan in bribes.

Some legal experts said declining use of the death penalty for corruption and other economic crimes is in line with China’s efforts to reduce capital punishment.

Huang Jingping, a law professor at China Renmin University, said that while it may impose the death penalty less frequently, China is likely to expand prison sentences for crimes that are now punishable by death.

“It just starts now,” he said. “It will be a gradual process to (reduce the use of the death penalty) from non-violent offenses to violent offenses.”

Legal experts in China have advocated reducing and eventually eliminating the death penalty since the 1980s. In 1998, China signed the International Covenant on Civil and Political Rights, promising to reform death-penalty policies. Through amendments of the Criminal Law in 2011 and 2015, China removed 22 nonviolent offenses from the list of crimes punishable by death, including fundraising fraud, smuggling of cultural relics, and money counterfeiting.

According to Ruan Qilin, criminal law professor at China University of Political Science and Law in Beijing, China has been mainly limiting use of the death penalty to violent offenses causing death, following most other countries. For economic crimes, death penalties are mainly imposed for drug trafficking and serious corruption with a huge social impact, Ruan said.

Fully eliminating the death penalty will be achieved step by step as the society’s understanding of the rule of law evolves, said Peng Xinlin, deputy director of the criminal law research center at Beijing Normal University.