Chinese Stock Brokers Line Up for $10.6 Billion in Fresh Capital

By Yue Yue and Yang Ge 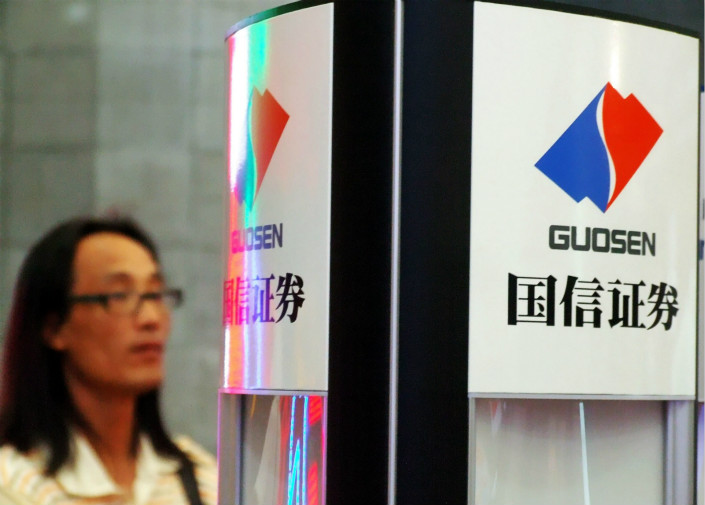 Last year’s weak market was particularly hard on Guosen and its peers because most rely heavily on fees from trading and other related services, such as investment banking, for much of their revenue. Revenue at the nation’s 131 leading brokerages fell 14.5% to 266.3 billion yuan last year, while profit tumbled 41% to 66.6 billion yuan, according to industry data.

Guosen and at least four other brokerages are looking to increase their capital by a collective 71 billion yuan ($10.6 billion) to bolster their financial positions.

Guosen is typical of the group, reporting that revenue fell 15.9% and profit dropped 25.2% last year. The capital increase plan would mark the company’s first securities-based fundraising since its IPO in 2014. Since then Guosen has dropped from the industry’s seventh largest player based on net assets in 2014 to 10th largest at the middle of last year.

The move makes Guosen the first independent brokerage to receive a green light from the China Securities Regulatory Commission (CSRC) among a group of companies looking to do similar fund-raising. In December, the brokerage arm of China Guangfa Bank was cleared to raise as much as 15 billion yuan.

Meantime, several other brokerages have announced similar plans that are still pending.

CSC Financial Co. Ltd. announced a 13 billion yuan fundraising plan in January, which has been approved by the company’s board. In December 2017 Industrial Securities Co. Ltd. floated a similar proposal to raise as much as 8 billion yuan. It submitted a revised proposal last July but still hasn’t received approval. Haitong Securities announced its own plan to raise 20 billion yuan nearly a year ago but hasn’t disclosed a formal plan yet.

As the industry has struggled, its net return on assets dipped to a several-year low of 3.52% in 2018, down 2.58 percentage points from the previous year. Despite last year’s weakness, the industry’s prospects could improve this year if current market trends continue. The benchmark Shanghai composite index is up more than 25% since the start of this year, putting the market into bull territory.