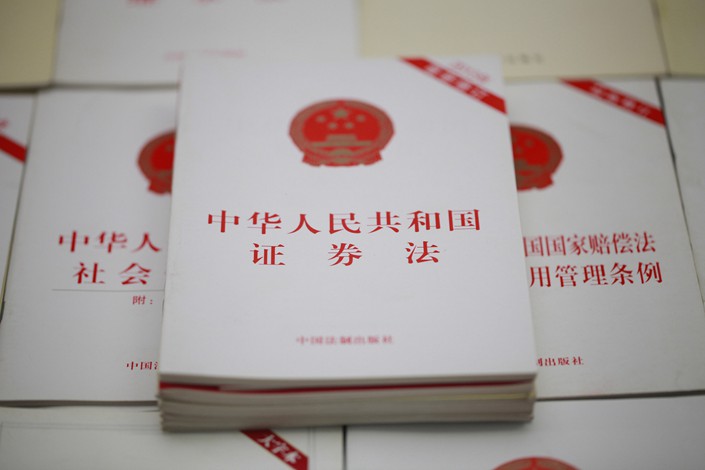 Policymakers have for years been trying to update the Securities Law, which has become outdated since it was first promulgated back in 1999 when the country’s financial markets were in their infancy. Photo: VCG

China’s lawmakers are in a race against time to submit long-awaited revisions to the Securities Law for their third review and avoid hitting a two-year time limit that would force them to shelve the draft altogether, squandering more than four years of work.

Under legislation that governs how laws are made, proposed bills and amendments have to undergo a reading by the Standing Committee of the National People’s Congress (NPC), the country’s legislative body, every two years. If they don’t the whole process has to be abandoned and started again from scratch. That fate may now be awaiting the Securities Law, which has yet to have its third reading with less than two months to go before the deadline. The Standing Committee was scheduled to debate the new law in February but did not do so.

Changing the law has taken on added urgency over the past few months as regulators prepare a long-awaited overhaul of the initial public offering (IPO) system to be tested in the new Nasdaq-style high-tech board that’s set to launch in Shanghai. The registration-based IPO mechanism will free companies from the current lengthy approval process for listing shares in mainland market.

The Securities Law needs to be changed to adapt to changes in the capital markets, said Fang Yan, a senior partner of Beijing-based law firm Jincheng Tongda & Neal specializing in securities law and vice president of the Shaanxi Provincial Lawyers Association.

“The launch of the new high-tech board and the pilot of registration-based IPO system is bringing (China’s) securities market into a new era,” said Fang, who is also a deputy in the National People’s Congress which starts its annual meeting in the Chinese capital on Tuesday. These changes will give securities firms and intermediaries far greater responsibility for assessing the suitability of IPO candidates, she said. But the current Securities Law lacks systematic regulation on intermediaries and Fang called for more clarity about what is required from them in the new market environment.

Fang has proposed several revisions to the Securities Law for discussion at the NPC meeting including the setting up a regulatory framework for intermediaries in the securities industry including a clearer definition of their power and duties, tightening oversight of institutions, and a framework to give better protection to investors.

Policymakers have for years been trying to update the Securities Law, which has become outdated since it was first promulgated back in 1999 when the country’s financial markets were in their infancy. The law has been revised several times but has undergone only one comprehensive revision which went into effect in 2006. Plans were put forward to make major amendments in 2014 and the draft law was given its first reading by the Standing Committee of the National People’s Congress (NPC), the country’s legislative body, in April 2015.

But enthusiasm has waxed and waned with the fortunes of the stock market. The market meltdown in the summer of 2015 spooked regulators and the draft made little progress as the focus shifted to market stability and risk control. Even so, the draft was given a second reading in April 2017 to comply with the two-year rule and to ensure it didn’t get shelved completely.

Sources close to the matter said there were significant differences of opinion on the draft revision during the second reading. Zhang Mingqi, an official of the NPC standing committee’s legislation board, said at the time that the draft was far from ready. “We will continue to review the draft, but there are too many difficulties. It will be a tough task to reach a consensus,” Zhang said.

Efforts to reform the IPO system resumed at the end of last year with the plan to set up the new high-tech board, giving new impetus to work to revise the Securities Law. But having missed its third reading in February, the draft will need to be debated during April’s session of the NPC Standing Committee if it is to progress any further.

But although the new law is bogged down in the review process, that won’t delay the introduction of the new IPO system. In December 2015, NPC Standing Committee gave the State Council a two-year mandate to carry out preparatory work and renewed it for a further two years in February 2018 because of the slow progress and complexities involved.

Yi Huiman, a veteran banker who took over as head of the China Securities Regulatory Commission in January, has given renewed hope that the law will be revised sooner rather than later. At his first press conference on Feb. 27, he said that China would push for revisions to the Securities Law to “significantly raise the costs of violating the law and regulations of the capital market.”