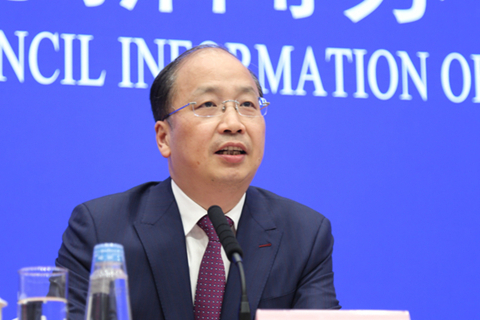 China’s securities regulator made his much-anticipated press debut on Wednesday after taking the hot seat last month, setting out his views on the new high-tech board that the government hopes will be a test bed of reform for the country’s stock markets.

Yi Huiman, chairman of the China Securities Regulatory Commission (CSRC) for less than a month, spoke at length about the new board and the difficulties it faces, including the lack of experience of brokerages and banks in pricing and underwriting initial public offerings (IPOs). Yi was previously head of the Industrial and Commercial Bank of China Ltd. (ICBC), the world’s largest lender by assets.

But he avoided commenting on the hottest topic of the day – the recent bull run in mainland stock markets. The benchmark Shanghai Composite Index, one of the world’s worst performers last year, has in contrast been the best performer so far this year, jumping almost 20% as investor confidence has been bolstered by signs that the U.S.-China trade war is deescalating and by the prospect of supportive domestic policies. In a reflection of the euphoria, the combined trading volume on the Shanghai and Shenzhen exchanges exceeded 1 trillion yuan ($149.7 billion) on Monday for the first time in more than three years.

Yi, 54 is a veteran banker who climbed the corporate ladder within ICBC over more than three decades. He became chief of the CSRC on Jan. 26, succeeding Liu Shiyu, who held the job for almost three years. The Chinese public often says that heads of the agency are “sitting on top of a volcano” due to sensitivity of the job and the unpredictability of China’s stock markets. Yi made reference to the analogy on Wednesday, joking that “whether I like it or not, I have already had a taste of what being in a volcanic crater feels like.”

In his opening remarks at a press conference organized by the Information Office of the State Council, China’s cabinet, Yi called on regulators to respect the market, the law and the professionals in the industry and to always be vigilant about risk control.

“(We) will let the capital market fully play its important role in allocating resources, setting prices of assets and mitigating risks” to enable the financial sector to better serve the real economy, he said.

He went on to focus on the Nasdaq-like high-tech board that’s set to be introduced in Shanghai after being proposed by President Xi Jinping in November. Preparations are underway to launch the new board which will be a testing ground for major changes in the way the country’s existing stock markets are run, including a registration-based initial public offering (IPO) system.

But Yi warned that implementation of rules for the new board won’t be simple, saying regulators are concerned that Chinese brokerages and investment banks may not have enough experience to handle the pricing and underwriting of IPOs in a market-based way, at least initially.

“One of the most different features of the high-tech board compared with other boards is the pricing and underwriting of shares,” he said. “It will test the core competitiveness of an investment bank. We are worried that some of the domestic brokerages might lack relevant experience, and it’s important for them to do full preparation to improve their capabilities.”

Authorities released draft rules for the new board late last month and opened them for public comment for about three weeks until Feb. 20.

Compared with regulations governing the main boards in Shanghai and Shenzhen, the draft rules have loosened listing requirements, including those related to profitability and dual-share structures.

Fang Xinghai, a vice chairman at the commission, said the relaxations will not compromise the standards of the new board because companies and their IPO intermediary organizations will be subject to stricter information disclosure requirements.

“We will impose stricter information disclosure rules after (listing requirements are loosened). This is the core of the introduction of the high-tech board with the trial of a registration-based IPO system,” he said.

Potential candidates for high-tech board listings are in industries such as emerging technologies, biotechnology, high-end manufacturing and new materials, said Huang Hongyuan, chairman of the Shanghai Stock Exchange, which will host the new board. Many of the firms are based in Beijing, the Pearl River Delta, the Yangtze River Delta, Wuhan in Central China, the southwestern city of Chengdu and Xi’an in North China. They have invested heavily in research and development and have good growth potential, he said.

Li Chao, another vice chairman of the CSRC, cautioned that stock prices could be volatile in the early stages of the high-tech board and the prices of some companies may not meet market expectations. That’s because it takes time for the policy innovations to be tested and improved, and the high-tech industry faces greater uncertainty than conventional sectors, he said.

“(We) hope the public can demonstrate some tolerance and understanding for the various issues that may emerge,” he said.