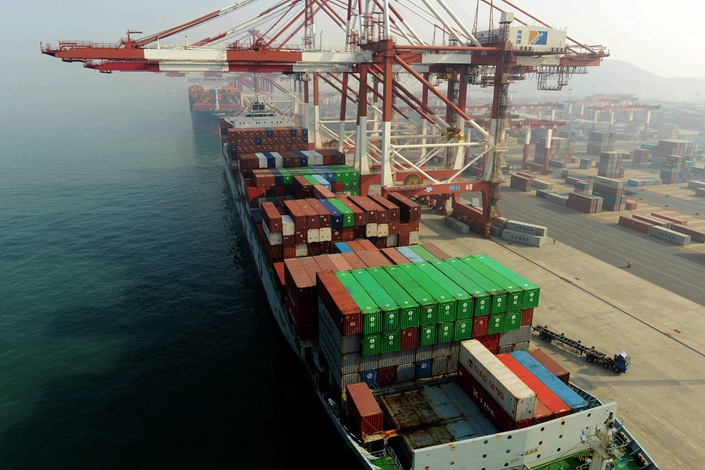 * The plunge in exports dragged the trade surplus down to $4.1 billion from $32.3 billion a year earlier

(Beijing) — China’s exports declined at the steepest pace in three years in February, with shipments to the U.S. falling at the most in almost two decades, hurt by the trade war, cooling global demand, and distortions created by the timing of the Lunar New Year holiday.

Exports of goods dropped 20.7% year-on-year in February to $135.2 billion, the biggest decline since February 2016, according to data released by the General Administration of Customs on Friday. That compared with a 9.1% increase in January and the median forecast of a 5.0% fall in a Bloomberg News survey of economists. Shipments to the U.S. declined 28.6% year-on-year to $22.7 billion.

Imports fell for the third consecutive month, dropping 5.2% year-on-year in February after a 1.5% slide in January, the data show. The steep decline in exports dragged the trade surplus down to $4.1 billion from January’s $39.2 billion and $32.3 billion a year earlier.

China’s trade figures in January and February are always affected by the timing of the Lunar New Year festival when factories and government offices shut down for a seven-day public holiday. This year’s break started on Feb. 4, 10 days earlier than last year. The customs bureau said that when taking the seasonal distortion into account, exports rose 1.5% year on year in February while imports increased by 6.5%.

For the first two months of the year combined, exports fell 4.6% year on year while imports fell 3.1%, the weakest start to the year since 2016, according to Julian Evans-Pritchard, an analyst with research firm Capital Economics.

“The February trade data are downbeat, even accounting for seasonal distortions,” he wrote in a note. “Tariffs are weighing on shipments to the U.S. But broader weakness in global demand means that, even if (President Donald) Trump and (President) Xi (Jinping) finalise a trade deal soon, the outlook for exports remains gloomy. Meanwhile, the sharp deceleration in import growth suggests that economic growth probably lost momentum at the start of this year.’

The import slowdown over the last few months is in part a reflection of the slowdown in China’s domestic economy, Louis Kuijs, head of Asia economics at Oxford Economics, wrote in a note. However, he pointed out that imports of goods for processing, such as components for electronic devices and smartphones that are subsequently exported, have been slowing much more significantly than “normal” imports used in China’s own economy. For January-February combined, processing imports fell 13% compared with a 0.4% drop in normal imports, he said.

The data “confirms our call in recent months that we should not worry too much about China’s domestic demand and also look elsewhere for the causes of the slowdown in global trade,” Kuijs wrote.

The trade war between the Washington and Beijing hit imports as well as exports in February, with inbound shipments falling 26.1% year-on-year to $7.9 billion after a 41.1% slump in January, which left China’s trade surplus with the U.S. at $7.9 billion, the lowest in two years.

Uncertainty over the resolution of the dispute continues. U.S. President Donald Trump has rolled back a March 1 deadline for imposing higher tariff rates, citing “substantial progress” in talks with China, but so far there has been no official news that agreement has been reached.