By Leng Cheng and Liu Jiefei 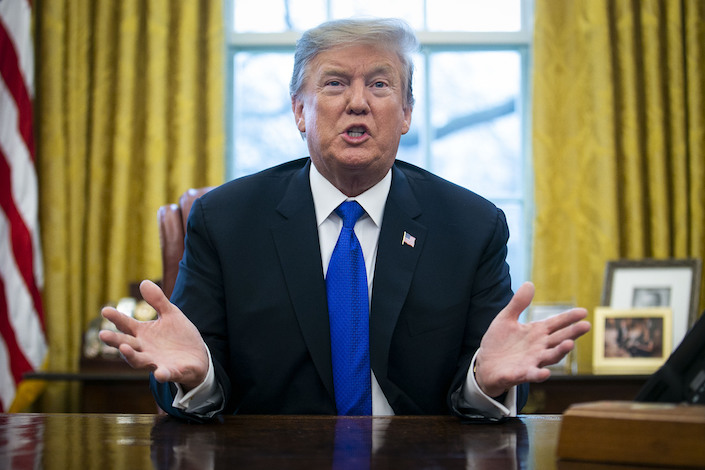 U.S. President Donald Trump speaks during a trade meeting with Chinese Vice Premier Liu He during the latest round of negotiations in Washington. Photo: VCG

The U.S. will delay raising punitive tariffs on $200 billion of Chinese imports, a move originally set to take effect on March 1, after the two sides made “substantial progress” in negotiations to end their trade dispute, President Donald Trump said Sunday on Twitter.

China’s stock markets rallied on the news, with the benchmark Shanghai Composite Index closing up 5.6% on Monday, the biggest jump since July 2015 and taking the index to its highest level since June 2018. The yuan also gained, with the Chinese currency rising as much as 0.6% to 6.6718 per U.S. dollar, its strongest level since July, before easing back to 6.6873.

Trump’s announcement followed the latest round of talks in Washington over the weekend, in which the two countries were racing to strike a deal to avert the escalation of trade frictions as the deadline loomed. The negotiations were set to end last Friday but were extended over the weekend after the two sides reported making substantial progress.

Trump said in his tweet that progress was made on “important structural issues including intellectual property protection, technology transfer, agricultural, services, currency and many other issues.” Assuming both sides make additional progress, he continued, the U.S. will be planning a summit with Chinese President Xi Jinping at Trump’s Mar-a-Lago resort in Florida to conclude an agreement. Trump did not give a date for the meeting.

Shortly after Trump's tweets, the state-backed Xinhua news agency issued a report confirming that the two countries made substantial progress in fields such as technology transfer, intellectual property protection, nontariff barriers, services, agriculture and currency. But Xinhua didn’t mention the extension of the deadline or the summit.

President Trump announced on Dec. 1 that he was delaying the imposition of higher punitive tariffs on $200 billion of Chinese goods from Jan. 1 to March 1 after meeting Xi during the G-20 summit in Argentina to try and resolve their escalating trade war. If no deal was reached by March 1, the tariff rate on those goods would rise to 25% from 10%.

In early January, U.S. officials travelled to Beijing for what was the first of several rounds of face-to-face discussions between negotiators from the two sides to try and come to an agreement before the deadline.

“This is clearly not the end of the negotiations, let alone the underlying tension between the two countries,” Louis Kuijs, Hong Kong-based head of Asia Economics at Oxford Economics, wrote in a note on Monday. “Nonetheless, the tariff suspension and increased likelihood of a more lasting agreement are a positive for international trade and business in both countries, as well as the global economy more generally.”

“In the case of IP (intellectual property) protection and industrial policy it requires complex structural and institutional reforms involving various layers and parts of the government,” he wrote. “It will also be hard to agree on the ‘verification and enforcement’ insisted on by the U.S. but disliked by China.”

One issue of contention that the two sides have agreed on is currency manipulation, Trump said on Friday. He did not elaborate and said details would be released later, but Bloomberg News reported on Wednesday that the U.S. is asking China to keep the value of the yuan stable.

Trump has long criticized the way China manages the yuan, and as a presidential candidate in 2016 pledged to brand the country a currency manipulator should he win the election, although he has yet to carry out his threat.

Some analysts have said that defining a stable yuan would be difficult, and even were a definition agreed, pushing China to maintain currency stability could do more harm than good.

“A clause pressuring China to maintain a ‘stable’ yuan is neither sensible nor practical,” economists at Nomura International in Hong Kong wrote in a note on Friday. “Surely, China should not weaponise its currency during trade conflicts, but requiring a ‘stable’ yuan deviates too much from pushing China for structural reforms.

“The best exchange rate policy for both China and the U.S. is to further de-peg the yuan from the dollar and encourage Beijing to further reform its exchange rate regime towards a free-floating one,” they said.