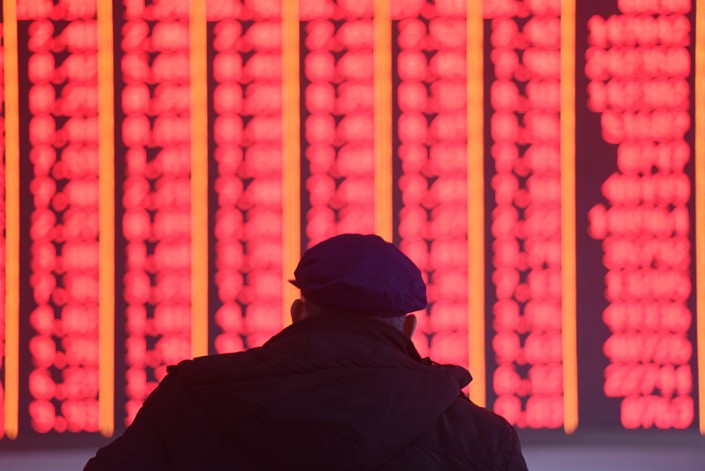 The benchmark Shanghai Composite Index was heading toward a technical bull market on Monday amid positive signs from trade talks with the U.S. Photo: IC

One of the world’s worst-performing stock markets last year is now running with the bulls.

The Chinese mainland’s benchmark stock index entered bull-market territory on Monday amid positive signs that China and the U.S. will deescalate their trade war coupled with a raft of policies to bolster investor confidence.

The Shanghai Composite Index leapt 5.6% to 2,961.28, posting an eight-month high and its biggest single-day gain since June 2015. At Monday’s close, the index was 21.3% above its January low, meeting the bar for a bull market.

It is generally agreed that a bull market begins when a stock benchmark rises 20% above a recent low.

The smaller Shenzhen Component Index also began a bull run after closing 5.59% higher on Monday. The combined trading volume of the two markets, which can serve as a barometer for investor sentiment, exceeded 1 trillion yuan ($147.72 billion) on Monday. Volume hadn’t been that high since November 2015.

The mainland’s A-share markets opened shortly after U.S. President Donald Trump announced that the U.S. would postpone a tariff increase on Chinese imports that had been set to take effect on March 1. Trump said the delay was the result of “substantial progress” made by Chinese and American delegates in trade negotiations over the weekend. Trump also said the U.S. will host a summit with Chinese President Xi Jinping at Mar-a-Lago, a U.S. resort in Florida where Trump has a home, to conclude an agreement.

“Announcing a delay in raising tariffs on Chinese imports has been in the works for some time. The market has been moving towards this view in recent weeks, as shown by the strong performance in A Shares and Asian equities,” said Tai Hui, chief Asia Pacific market strategist at JPMorgan Asset Management. “It helps to underpin positive investor sentiment in what could be a testing week if February PMI numbers continue to show softening of the global economy.”

Swiss banking giant UBS also said in a note that “a positive resolution on trade talks adds to the better climate for equities alongside a more dovish Fed and better economic data.”

A turnaround in social financing data in January and Xi’s call on Friday for finance to play a bigger role in supporting China’s economic growth might have also paved the way for a short-term boost in mainland stocks, analysts said.

Blue-chip shares such as banks and brokerages led the gain on Monday. All 35 listed securities brokerages in Shanghai and Shenzhen jumped by the 10% daily limit, while the country’s four largest lenders all rose more than 5%. Small-caps increased too, with the Nasdaq-style startup board ChiNext closing 5.5% higher.

“The net 4.64 trillion yuan of growth in total social financing indicates that China’s economy is bottoming out. The market is repricing stocks on the upbeat data, and will lift valuations and risk appetite,” said Min Liangchao, chief analyst at HSBC Jintrust Fund Management Co. Ltd.

Late last year, the Chinese government began dialing back trading restrictions on stocks and rolled out a slew of measures to allay pessimism about the cooling economy, mounting corporate defaults and tightening liquidity. The measures included introducing new monetary tools such as the targeted medium-term lending facility, a proposal to scrap a 44% first-day trading limit on initial public offerings (IPO), and draft rules for a high-tech board that will serve as a testing ground for a long-planned registration-based system for IPOs.