China’s New Lending for Small Firms to Start This Month 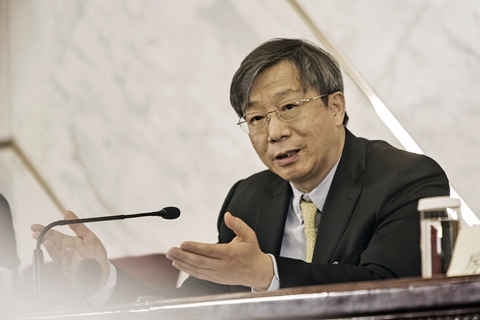 * Yi said measures have provided ample mid- to long-term liquidity, which has been effectively transmitted to the real economy

China’s central bank will step up support for the economy by lending money to banks under a new policy tool starting in late January, People’s Bank of China Governor Yi Gang said in an interview with Xinhua News Agency and other state media published Wednesday.

The newly created targeted medium-term lending facility (TMLF), intended to provide long-term, lower-cost funding for financial institutions supporting small and private businesses, was announced in December as part of an array of measures to bolster the cooling economy.

The central bank has eased monetary policy by cutting banks’ reserve-requirement ratio four times last year and again earlier this month. It also expanded credit through the medium-term lending facility (MLF), another tool introduced in 2014 to allow commercial and policy banks to borrow from the central bank at a lower rate.

Yi said these measures have provided ample mid- to long-term liquidity, which has been effectively transmitted to the real economy. The next step will be further improving and unblocking monetary policy transmission from both supply and demand sides, he said.

Yi said financing demand has declined as economic growth slows and banks’ risk appetite falls. Growth of outstanding total social financing slowed to a record low of 9.9% in November from 10.2% in October, data from the central bank showed.

Meanwhile, China’s gross domestic product expanded 6.5% year-on-year in the third quarter of 2018, its slowest quarter of growth since 2009. Data due later this month is expected to show that 2018 growth slowed to around 6.6% from 6.9% the previous year.

Yi said the key to improving monetary policy transmission is to establish an incentive mechanism that would encourage banks to actively increase support for the real economy, instead of just being forced to reach goals set by the central bank.

The central bank will work together with other departments and regulators to provide incentives to banks, he said. For example, the Finance Ministry will give tax exemptions on interest income from loans to small and micro firms, and regulators will loosen some due diligence requirements on banks, Yi said.

Yi also reiterated the central bank’s commitment to a prudent monetary policy that is neither too tight nor too loose. When asked how to walk a fine line of appropriate tightness, the governor said the central bank would accurately control a reasonably ample and structurally optimized overall liquidity by avoiding overly rapid liquidity contraction or flood-like liquidity injection.

For example, Yi said the most recent cut to banks’ required reserves would be implemented in two steps, the first one Jan. 15 and the second Jan. 25, to avoid flooding the financial system.

Even with the stimulus measures, the governor said China would stick to the “main theme of structural deleveraging.”

“We will properly tackle local governments’ debt risks and continue to clean up overcapacity, debts and zombie firms,” Yi said.

Yi also called for vigilance against “black swan incidents,” or unforeseen events, and for maintaining stability in the country’s stock, bond and foreign exchange markets.