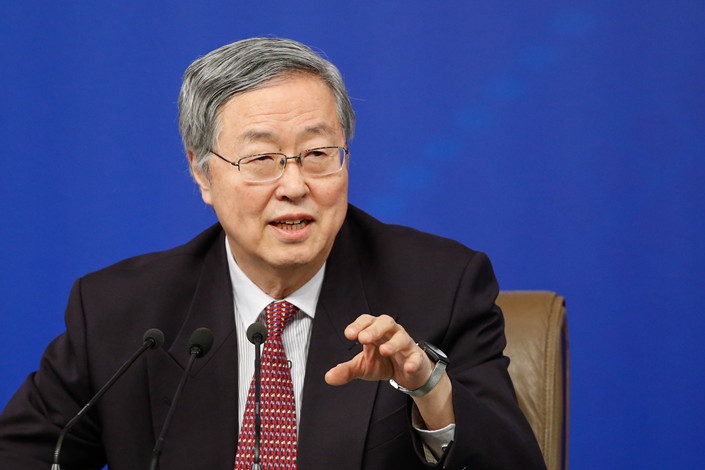 (Shanghai) — China’s monetary policy still has room for “quantitative adjustment” to support economic growth, according to Zhou Xiaochuan, former governor of the central bank, bolstering expectations that policymakers will implement more easing measures in the face of increasing downward pressure on investment, consumption and exports.

Zhou, who spoke on Monday in Shanghai, also said he expects the government to adopt a more proactive fiscal and monetary policy, according to comments from his speech released by investment bank UBS Group AG, which hosted the closed-door meeting.

“Our monetary policy still has room for quantitative adjustment,” he said. “It will continue to support economic growth, the job market and investment on the basis of maintaining price stability. We hope to see better coordination between fiscal policy and monetary policy. China is also moving towards improving the exchange rate policy.”

Zhou is the longest serving governor of the People’s Bank of China (PBOC) having held the job for 15 years before retiring in March 2018. He is now vice chairman of the Boao Forum for Asia, a government-backed nonprofit organization based on China’s southern island province of Hainan.

Zhou’s comments, which echo those of other policymakers, follow Friday’s announcement by the PBOC of a 100 basis-point cut in banks’ reserve requirement ratio (RRR) implemented in two phases in January, which will result in a net injection of around 800 billion yuan ($116.8 billion) into the financial system. The move is intended to “increase funding sources” and “reduce financing costs” for banks and the real economy, the PBOC said.

The cut in the RRR was the fifth over the past 12 months, in what the central bank has described as targeted adjustments aimed at helping direct funding to small and private companies who find it hard to get loans from banks. The ratio will stand at 13.5% for the largest banks and 11.5% for smaller lenders after the January reductions are implemented.

But analysts say that the cuts, along with other measures such as lowering taxes and restarting approvals for urban rail investment projects, are clearly intended to prevent a steeper slowdown in economic growth than the government is prepared to tolerate, especially given the deepening impact of the trade war with the U.S.

Chinese policymakers decided at a key economic meeting in December to take “bolder and more effective” measures to implement “a proactive fiscal policy” in 2019, pledging more tax cuts and government spending, including a substantial increase in the issuance of special-purpose local government bonds. Although they said monetary policy would remain “prudent,” they omitted the word “neutral,” raising expectations of a more relaxed stance in 2019. Central bank officials have also said monetary policy will be more flexible to allow the PBOC to adjust to changes in economic and market conditions.

Analysts widely expect China’s economic growth, as measured by gross domestic product, to have slowed to around 6.5% to 6.6% in 2018 from 6.9% in 2017, which would be the weakest pace in almost three decades. UBS expects a further slowdown in 2019 to 6.1% while investment bank Nomura sees a drop to 6%.

In terms of monetary policy, the slowdown is likely to mean more cuts in the RRR to ensure sufficient liquidity in the financial system. This will support lending, keep interest rates low and provide banks with cash to buy up an expected surge in bond issuance by local governments this year as they step up spending to bolster growth.

Wang Qian, chief Asia-Pacific economist at Vanguard, one of the world’s largest asset managers, said three to four more cuts in the RRR are likely over the remainder of 2019 as policymakers made it clear at their December meeting that liquidity conditions will be more relaxed than in 2018.

“The RRR cuts can effectively ease liquidity condition and offer long-term funds for banks,” rather than providing short-term funds through tools such as the Medium-Term Lending Facility which can create mismatches in banks’ funding needs, she said at a media panel in Shanghai on Tuesday.

“But to make structural adjustments in the economy, relying solely on monetary policy is not sufficient. China must push forward fiscal policies such as tax cuts and actively promote market-oriented reforms. This will also help to boost confidence,” Wang said.

Lu Ting, chief China economist at Nomura, said the current relaxation in policy cannot fully hedge the downward pressure on the economy, which will increase in the first half of 2019.

Writing in a Caixin commentary (link in Chinese) on Tuesday, he said: “Recent policy changes indicate that the government’s concerns about the economic downturn have intensified, and the willingness to loosen policies and implement stimulus has been further strengthened.”

Lu said he expects some key measures, such as relaxing real estate regulation and control policies in first- and second-tier cities, will be launched in the second quarter or later in the year, which will lead to a gradual stabilization of growth.