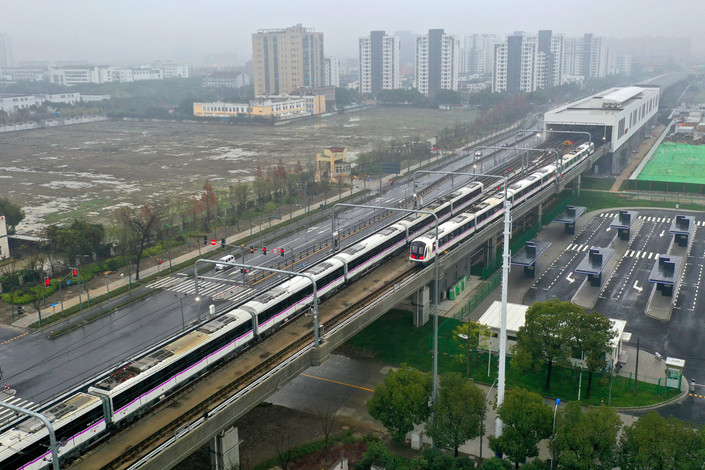 Multibillion-dollar intercity rail plans in Jiangsu and Anhui provinces are the latest in a slew of rail projects that the Chinese central government has approved in recent months. Photo: VCG

* Plan pushes forward Jiangsu’s plan to have rail links to all its cities with populations exceeding 200,000 by 2025

The National Development and Reform Commission (NDRC) has given the green light for Jiangsu and Anhui provinces to invest a total of 231.7 billion yuan ($33.8 billion) to build 1,063 kilometers (660.5 miles) of intercity railway lines, the economic planning agency said in a statement (link in Chinese) released on Wednesday.

Most of the investment, amounting to 218 billion yuan, will be in Jiangsu and pushes forward the province’s ambition to have rail links to all its cities with populations exceeding 200,000 by 2025, according to the statement, which was dated Dec. 26.

Half of Jiangsu’s spending will be funded by fiscal revenue and other types of equity capital provided by the provincial and lower-level local governments. The remainder will be raised from bank loans and other types of debt, the statement said. The funding plan for Anhui is similar, but the NDRC did not specify the amount of equity capital to be supplied by local governments.

The announcement is the latest in a slew of rail projects approved by the NDRC in recent months. On Dec. 13 the commission gave the go-ahead to the Guangxi Zhuang autonomous region in South China to invest 51.7 billion yuan to construct two railway links totaling 325 kilometers in length. Two days earlier, it greenlighted Shanghai’s plan to build six new subway lines and 286 kilometers of new urban rail lines that will cost a total of 298.3 billion yuan over four to six years.

At a key meeting last month to set economic policy for 2019, China’s leaders vowed to increase spending on infrastructure including urban transport facilities, logistics and utilities as part of government efforts to expand domestic demand. Policymakers acknowledged “downside pressure on the economy” against the backdrop of a “complicated and grim external environment” — an apparent reference to the country’s ongoing trade war with the U.S.

For this year, the Standing Committee said local authorities will be able to issue 1.39 trillion yuan worth of new bonds before their 2019 quota is officially approved at the annual session of the NPC in March, an amount equal to 64% of the quota for the whole of 2018. The figure includes 810 billion yuan of special-purpose bonds, 60% of last year’s quota for such debt, which is raised specifically for spending on infrastructure and utility investment.

Analysts widely expect growth in infrastructure investment to pick up this year on the back of greater policy support from the central government and a low comparison base last year. The year-on-year increase in infrastructure investment, excluding electricity, heating, gas and water supply, slumped to just 3.7% in the first 11 months of 2018 from 20.1% in the same period the previous year due to a government campaign to crack down on “shadow banking” and off-balance-sheet borrowing by local governments to control financial risks and rein in debt.

But some economists caution that the extra spending this year may not amount to a significant boost, given continuing constraints on their ability to raise money. The government is still maintaining a relatively tight grip on local authorities’ off-balance-sheet borrowings and land sales, a key source of local fiscal revenue, are expected to slow due to a sluggish property market.

Although the government is increasing the amount of bonds local authorities can issue, the size of this legitimate on-balance sheet debt is dwarfed by the scale of their off-balance-sheet liabilities, Rong Jing, an analyst with BNP Paribas in Beijing, told Caixin.

“If the government only expands on-budget debt without meaningfully loosening curbs on off-balance-sheet borrowings, financing for infrastructure will remain a rather big problem this year, particularly as local government income from land sales is likely to decline from last year,” she said.

“We don’t think the rebound in infrastructure investment will be very strong,” she said, estimating growth of 8% to 10% this year from 2018.