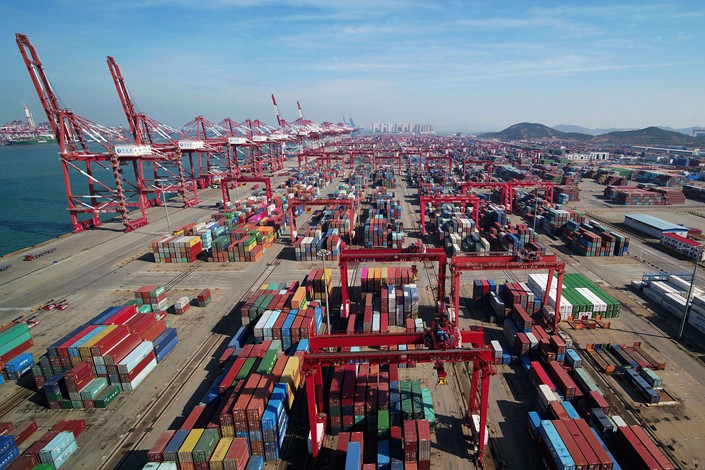 China’s trade surplus with the U.S. jumped to a record-high in November even though its overall exports grew at their slowest pace in eight months in November, official figures showed Saturday.

The country’s overseas shipments rose to $227.4 billion in November, up 5.4% compared to a year earlier, according to data released by the General Administration of Customs. The growth rate was the lowest since exports declined 3% in March, after exporters rushed to deliver their shipments during the first two months of the year amid fears that a full-blown trade war between China and the U.S. was looming.

Imports increased at an even more moderate pace of 3% from a year ago to $182.7 billion last month, the slowest rate since October 2016, when purchases of foreign goods fell over 1%, customs figures showed.

Although China’s trade performance this year has been distorted by the intensified Sino-U.S. trade dispute, its exports were already under downward pressure over the long term due to the bleak economic outlook for the country and world, said analysts with China Merchants Bank.

“(China’s) foreign trade will decelerate eventually as domestic and foreign economic growth moderates and prices fall,” they said in a note.

The country’s exports to the U.S. exceeded its imports from America by $35.6 billion in November, the highest trade gap ever, customs data showed.

The rise in the trade imbalance was expected because exporters continued to front-load shipments to the U.S. last month to beat the increase of the US tariff rate originally scheduled for January 1, which would have severely dented their profits. Such worries have eased to some extent since Trump and President Xi Jinping agreed at their summit on December 1 to call a truce to their tariff war.

“Exporters still had a motive to front-load in November,” the China Merchants Bank analysts said.

The administration of U.S. President Donald Trump’s has slapped tariffs on a total of $250 billion worth of Chinese imports since July as punishment for alleged unfair trade policies such as forced technology transfer and the theft of American intellectual property. Beijing has responded with its own retaliatory duties on imports from the U.S.

China’s total overseas shipments remained robust in the first months after the escalation of trade tensions, with export growth accelerating for two consecutive months from September. But analysts widely expected that strength would be unsustainable as it was mainly underpinned by front-loading activities.

Washington has attached strings to the tariff ceasefire with Beijing, warning that if the two countries fail to strike a deal within the next 90 days, the U.S. will raise punitive tariffs on $200 billion worth of imports from China to 25% from the current 10%, the increase previously slated for the start of next month.

The drop in the growth rate of imports suggests domestic demand weakened in November even though authorities have stepped up efforts in recent months to stabilize growth, including speeding up government-led infrastructure investment and bolstering other economic activities. That is set to add to concern over the outlook for the Chinese economy.

Since late October, China’s top leaders have mounted an unprecedented rescue effort for the private sector that has mainly aimed at boosting lending to firms and reducing their tax burdens. Local authorities have also pledged to bail out cash-strapped private businesses in a bid to stem a surge in debt defaults.

However, credit growth has remained weak as financial institutions and investors have turned increasingly cautious amid domestic and foreign uncertainties.