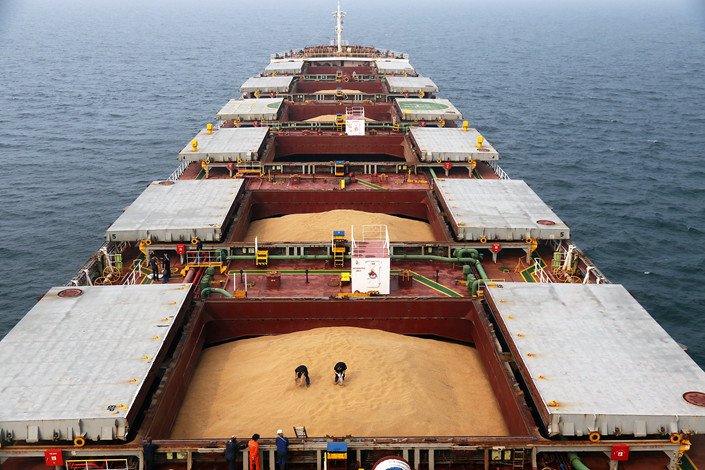 Workers take samples of soybeans on a ship at the port of Yantai in East China’s Shandong Province in July 2016. Photo: VCG

The Ministry of Commerce said Thursday China will immediately start implementing agreements on agricultural products, energy and cars that were reached at the weekend summit between Chinese and U.S. leaders over their ongoing trade dispute.

Calling the talks with the U.S. “smooth,” Ministry Spokesman Gao Feng said at Thursday’s news conference that China is “fully confident” it will reach an agreement with the U.S. in 90 days, though he didn’t offer details. He added that the talks will also address areas such as intellectual property rights, technology cooperation, market access, and the trade imbalance.

On its surface, the ministry’s statement addresses one of the sources of confusion from the 90-day trade cease-fire that U.S. President Donald Trump and Chinese President Xi Jinping agreed to over the weekend at the G-20 summit in Buenos Aires. In the hours after the summit, the two sides each put out statements emphasizing different concessions, some of which the other side did not acknowledge, rattling the U.S. markets due to confusion over the deal.

The White House said Sunday after the summit that “China will agree to purchase a not yet agreed upon, but very substantial, amount of agricultural, energy, industrial and other products from the U.S. to reduce the trade imbalance between the two countries” and “China has agreed to start purchasing agricultural products from U.S. farmers immediately.”

However, China’s official post-summit statement on Sunday did not mention these details.

In another example, the White House said the two sides will also negotiate “structural changes” regarding forced technology transfers, intellectual property protection, cyber intrusions and cyber theft, services and agriculture. However, China’s statement only mentioned that China will speed up “consultations and reach a concrete agreement that is mutually beneficial.”

Over the next 90 days, China and the U.S. will move toward the ultimate goal of canceling all additional tariffs, Gao said. In the meantime, China will continue to negotiate with the U.S. in areas including agricultural products, energy and industrial products.

On the issue of auto tariffs, Gao mentioned that the State Council’s tariff department will release a statement about the issue, but he didn’t say when.