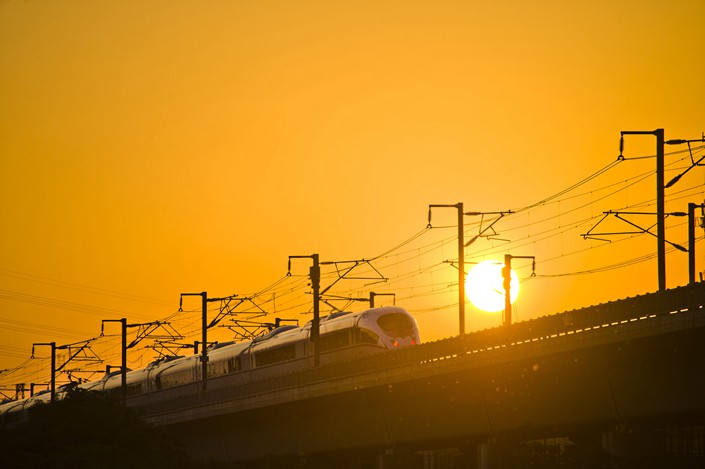 A bullet train travels through East China’s Jiangsu province in May 2016. Photo: VCG

The general manager of the national railway operator told Caixin that a 70% reduction in the registered capital of the Beijing-Shanghai high-speed line ahead of its planned initial public offering (IPO) was a “technical move,” and that there has not been a change in its shareholding structure.

Speculation was sparked when recent business registration materials revealed that registered capital for the Beijing-Shanghai line was downsized by around 70% on Jan. 31. According to a government database (link in Chinese), the figure went from 130.6 billion yuan ($19.4 billion) down to 40 billion.

Analysts said prior to Lu’s comment that such a move is relatively rare. Reasons for the downsizing could include large losses or inaccurate earlier data, they said.

Lu Dongfu, CRC’s general manager and Communist Party secretary, told Caixin on the sidelines of the ongoing national legislative session in Beijing Sunday that the reduction was a “technical move” as a re-assessment of the lines’ total assets is needed before the IPO, and the downsizing will benefit the listing process.

Also noteworthy was the disappearance of Bank of China Group Investment Ltd. from the list of registered shareholders in the registration materials. The bank previously owned 3.99% of the line and was one of its oldest stakeholders. CRC didn’t give an official reason for the changes.

Lu, who was attending the legislative session in his capacity as a deputy to the National People’s Congress, insisted that “no stakeholder has exited, and no change to the shareholding structure has been made before the listing.” Caixin reached out to CRC for further explanation of his comment, but received no response as of the time of publication.

The Beijing-Shanghai line IPO is expected to be one of the biggest domestic listings of either this year or the next. The China Securities Regulatory Commission confirmed on Feb. 25 that CRC had hired CSC Financial, a joint venture of financial conglomerate Citic Group, as the institutional adviser for the planned listing. The announcement said preparatory work is scheduled to be completed by year end.

The Beijing-Shanghai line going public would be one of the rail operator’s largest moves yet to begin paying down hundreds of billions of dollars in debt built up over the past decade.

CRC began accelerating a drive to securitize its assets last year as part of a broader Beijing campaign to get companies and government agencies to pay down the debt that has piled up over years of breakneck growth. As of September, CRC said it owed a massive 5.28 trillion yuan ($789 billion). The debt has raised concerns among industry experts that further expansion would not be sustainable.

The Beijing-Shanghai line is one of CRC’s more lucrative assets thanks to the popularity of travel on the route between two of the nation’s largest, richest cities. CRC said the line, which opened in 2011, has been profitable since 2014. In 2016, it earned 9.5 billion yuan, up from 6.6 billion yuan a year earlier, according to its financial reports.