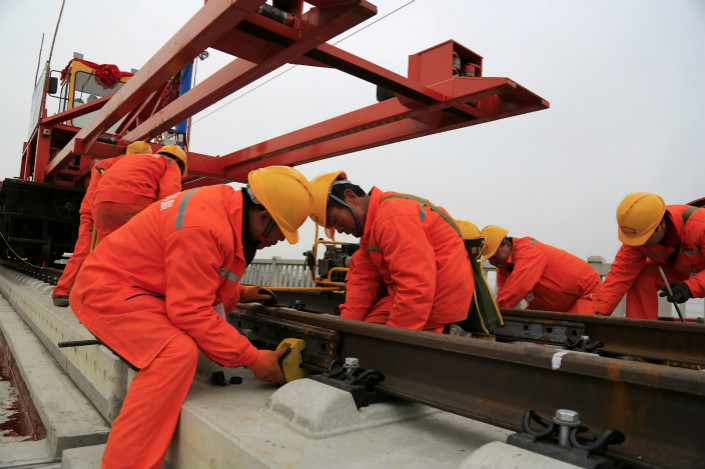 China Railway Corp. (CRC) and the China Securities Regulatory Commission (CSRC) posted separate announcements Tuesday related to what could become one of the biggest new domestic listings this year or next. The groundbreaking move would be one of the rail operator’s largest yet to pay down hundreds of billions of dollars in debt built up over the past decade by building the world’s largest high-speed rail network.

CRC engaged CSC Financial, a joint venture of leading financial conglomerate Citic Group, as the official institutional adviser to get the listing process underway, according to an announcement on the site of the CSRC’s Beijing branch. It said CRC officially signed its agreement with CSC Financial last October.

In a separate announcement on its microblog, CRC confirmed that it hopes to complete supporting work for the IPO by the end of this year.

CRC began accelerating a drive to securitize its assets last year as part of a broader Beijing campaign to get companies and government agencies to pay down big debt piled up over years of breakneck growth. As of September, CRC reported owing a massive 5.28 trillion yuan ($789 billion).

The new materials show a 70% reduction in the registered capital for the Beijing-Shanghai line, from a previous 130.6 billion yuan to a current 40 billion. CRC didn’t give a reason for the drop, and analysts said such a move is relatively rare. Reasons could include large losses for the asset or inaccurate earlier data.

Also noteworthy was the disappearance of Bank of China from the line’s list of registered shareholders. The bank, one of China’s four largest, previously owned about 4% of the line and was one of its oldest stakeholders. Other investors include various entities around stations along the line that have previously taken part in construction and operations as well as investment.

The Beijing-Shanghai line is one of CRC’s more lucrative assets thanks to the popularity of travel on the route connecting two of the nation’s largest, most advanced cities. CRC said the line, which opened in 2011, has been profitable for more than three years. In 2016, it earned 9.5 billion yuan, up from 6.6 billion yuan a year earlier, according to its financial reports.

CRC’s decision to float the unit also came under pressure from two other shareholders — Ping An Asset Management Co. Ltd. and a national social security fund — which have a combined 20% stake in the operation, sources previously told Caixin. CRC holds a controlling 46% share of the line.

In addition to securitization of existing lines, CRC is also attempting to ease its debt burden by bringing in private partners to help build some newer lines. In September 2017, a group led by private equity giant Fosun Group signed an agreement to launch China’s first privately controlled railway line under a government program designed to finance more infrastructure with private money.