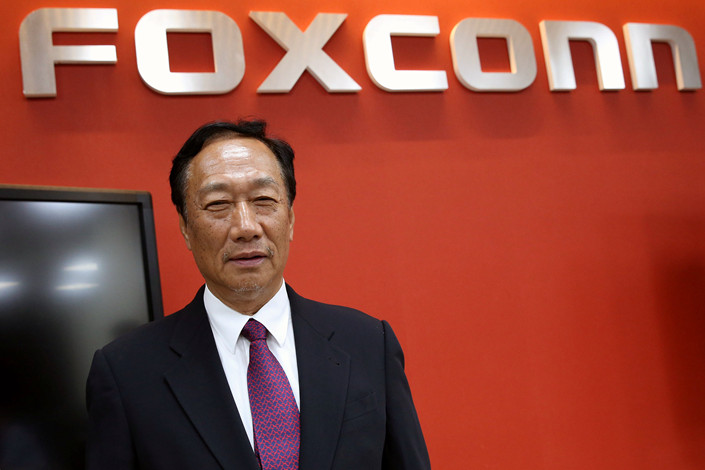 Terry Gou, founder and chairman of Foxconn, reacts during an interview in Taiwan in June 2017. Photo: VCG

The head of Hon Hai Precision Industry Co. Ltd. has trashed a patent lawsuit filed by Microsoft against the company, accusing the tech giant of “scapegoating” it.

Microsoft Corp. on Friday filed suit in a California federal court against the Taiwan contract manufacturer and parent company of the better-known Foxconn, alleging it did not comply with a 2013 agreement to make royalties payments. Microsoft is demanding royalty reports and a review of Hon Hai’s books.

Microsoft alleges Foxconn submitted an inaccurate royalties report in 2014, and issued no reports and paid no royalties for the past four years, Axios reported.

But Hon Hai founder and Chief Executive Terry Gou responded in a defiant media briefing (link in Chinese) on Tuesday, claiming his company wouldn’t have to “pay a dime” because as a manufacturing contractor it was not subject to licensing fees for patents.

“Microsoft is resting on its laurels, hoping to extend its hegemony from the PC era,” said Gou. “I have a lot of sympathy for it.”

“Hon Hai has become a scapegoat… [in] a commercial war between two American firms — Microsoft and Google,” said Gou, alleging that the Google-owned Android may have violated Microsoft’s patents.

Gou accused Microsoft of “bullying” Taiwan companies, and said it dared not sue Chinese mainland companies for fear of being boycotted.

In a statement cited by multiple media outlets, Microsoft said the legal action was taken to force Hon Hai to open its books in accordance with a contract they signed in 2013.

“Our working relationship with Hon Hai is important, and we are working to resolve our disagreement,” the company said.

It is not the first time Hon Hai has been involved in a patent lawsuit. In 2017, it was sued by U.S. chip-maker Qualcomm for royalties on iPhone patents. And in 2011 Microsoft filed a similar suit accusing a Hon Hai unit manufacturing e-readers for Barnes & Noble of patent infringement.

Tang Xiangyang, a lawyer at Guangzhou-based Yingke Law Firm, said if Hon Hai loses the legal fight, it is the company’s clients, not Hon Hai, that will have to pay the penalty.