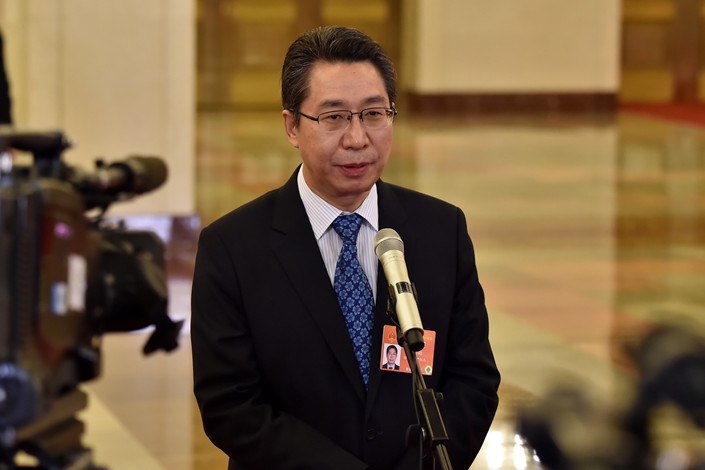 Shen Changyu, director of the state intellectual property office, speaks to the media in the Great Hall of the People in Beijing on March 12. Photo: VCG

(Beijing) — China’s legislature is expected to hold a second reading of a draft of revisions to the country’s Patent Law soon, according to people familiar with the matter. Government officials have indicated earlier that the draft law is likely to be passed by the end of this year. But divisions persist over its potential chilling effect on innovation, and the impact of giving enforcement powers to patent administrators, as well as beefed-up penalties.

The revision of the law began in November 2011. After multiple rounds of feedback, the draft was finally approved by the State Council in December 2018, and submitted to the National People’s Congress, the country’s legislature, for deliberation. According to those who read the law during the public comment period in January and February this year, there is a general consensus that it should strengthen patent protection, but many disputes remain over specific provisions. Some clauses, such as those regarding penalty measures for patent infringement, are impractical.

“Revising the law is a big opportunity,” said Cheng Yongshun, director of the Beijing Intellectual Property Institute. “We should carefully study what has hindered our innovation and what direction we should develop in the future.”

Experts such as Cheng — who was one of the first judges engaged in intellectual property trials in China — say that the first two amendments were primarily responses to external pressure to comply with international standards. In 2008, however, the motivation for amending the law shifted to solving problems in domestic patent practices, including strengthening the protection of innovation.

Looking at the numbers, Chinese companies appear to be growing more innovative. According to the World Intellectual Property Organization, China ranked first globally in the number of intellectual property applications for patents, trademarks and industrial designs in 2017.

But Shen Changyu, director of the State Intellectual Property Office (SIPO), told a press conference on Jan. 10 that the number of patent applications people take out does not reflect how many are actually authorized — nor their quality. “Take invention patents, for example. The number of applications in 2018 was close to 1.5 million, but the number granted remained between 400,000 and 550,000, roughly the same as in the United States. The criteria for authorization of intellectual property rights have not changed with the number of applications,” he said.

The most recent revision to the Patent Law comes after more than eight years of research and submissions. Zhang Yumin, honorary dean at the school of intellectual property law at Southwest University of Political Science and Law, said the revision originated from a need to adapt to China’s economic development — not from external pressure. Second, the Patent Law is closely related to the rapid development and technological progress of China’s economy as people are constantly putting forward new ideas.

The way Zhang sees it, the Patent Law is being revised because patent infringement is so common in China. And because under the current system, proving your patent has been violated is costly and time consuming, which frustrates companies’ impulse to innovate.

The draft also aims to give patent law enforcement authorities the means to deal with disputes, giving them the power to question parties involved in a dispute, conduct on-site inspections, consult and copy-related contracts, invoices, and accounts, and seize products related to suspected illegal activities if there is evidence that the products are counterfeit.

However, this aspect of the draft law has aroused concern among academics.

For over 10 years, scholars such as Li have called for the separation of intellectual property administration and enforcement and have even submitted reform proposals. But their calls have received few positive responses. It was not until March 2018, when the State Council launched a new round of institutional reform, that patent administration and enforcement powers were separated.

The reform plan adopted at the annual meeting of the National People’s Congress in March 2018 proposed that SIPO should be reorganized and administered by the State Administration for Market Supervision, integrating the responsibilities of a number of related offices under one umbrella. In a statement, State Councilor Wang Yong said that the main responsibilities of the reorganized SIPO are to protect intellectual property rights, promote the construction of an intellectual property protection system, register trademarks, patents, geographical indications of origin, and guide the enforcement of trademark and patent laws.

“The relationship is very delicate, but at least the functions of intellectual property management and administrative law enforcement are clearly separated,” Li said.

Under China’s current legislative framework, the protection of intellectual property rights is dominated by judicial protections and is supplemented by administrative protection. The draft submitted by SIPO to the State Council in 2015 stipulated that the patent administration departments in county governments could take on the job of administrative law enforcement, drawing criticism from academics and the judicial world.

“As a protection of civil rights, patent rights should be handled through judicial channels,” the article read. “The participation of administrative organs can only be an expedient choice in a specific historical period and under specific circumstances.”

Academics, including Zhang Yumin, Li, and Cheng told Caixin that excessive involvement of administrative law enforcement in private patent disputes would lead to imbalanced competition in the market. Moreover, because the SIPO handles patent authorization and confirmation as well as patent infringement, it would be difficult for the office to remain neutral.

China’s Supreme People’s Court, the mainland’s highest court, established an Intellectual Property Court shortly after the draft amendment was submitted to the legislature. According to the pilot scheme approved by the central government, appeals hearings of certain civil and administrative cases should be centralized and held in the Supreme Court’s Intellectual Property Court.

On Jan. 8, the court held a consultation meeting with experts. According to scholars who attended the meeting, the judges on the Supreme Court were clearly opposed to the expansion of administrative power. “They felt that the centralization of patent jurisdictions was clearly more in line with the reform direction of the central government,” one scholar, who wished to remain anonymous because it was a closed-door meeting, told Caixin.

Beyond the clause expanding SIPO’s administrative powers, new measures to increase the penalties for patent infringement have also stirred controversy.

Patentees have long complained that lawsuits rarely compensate them even if they win, and this has resulted in a low willingness to defend one’s rights through judicial channels. The draft amendment follows the provisions of the Trademark Law by introducing a punitive damages system and reducing the burden of proof of the patentee.

The draft amendment adds that, in serious cases, the value of compensation can be determined based on the rights holder’s losses, the profits of the infringer, or one to five times the royalties of the patent license. If the compensation amount is difficult to calculate, the court can determine to increase it by 100,000 yuan to 5 million yuan, up from 10,000 yuan to 1 million yuan in the current law. The draft also allows the court, in certain cases, to order the alleged infringer to provide account books and information related to the infringement. If they do not provide this information the court may rely on the evidence provided by the rights holder and order a fixed sum of compensation.

Yang believes that introducing a punitive damages system can deter infringement, reduce the burden of proof needed for damages, make it possible to obtain a higher amount of compensation, and enhance deterrence.

However, the maximum compensation standard of five times the damages caused exceeds the global norm. Li Yang, a professor at Sun Yat-sen University in Guangzhou, said that charging one to five times the punitive damages would devastate the perpetrators of patent infringement. “Where did five times come from? Before the highest compensation was three times that of the punitive damages, like in the United States,” he said. “Is this beefed-up level of protection reasonable?”

Cheng worried that the meaning of “intentional infringement of patent rights” may be too vague. “Patent and trademark rights are different,” he said. “Today, all technological innovations and inventions have a long shadow of predecessors, so it’s difficult to judge whether the infringements are intentional or not.”

“Intentional infringement involves intentionally imitating something already patented, but what if it is to intentionally improve the patented technology? As a result, those who made the improvements see no infringement, but whether it constitutes infringement is decided by a judge,” he said. Different judges and different levels of the courts will have different conclusions — and a decision to impose five times the punitive damages on the infringer could be disastrous. “The consequences are unimaginable. Innovation may even take a blow,” he said.

Improving the efficiency of patent authorizations and reducing the waste of administrative and judicial resources has long been a problem that the industry hopes to solve, but the current draft amendment does not address these issues, experts say.

One of the major restrictions for judicial protection of intellectual property rights is the long litigation cycle. In patent litigation, once the plaintiff initiates an infringement lawsuit, the defendant will often file an invalid patent application with the Patent Re-examination Board, causing the court to suspend the trial until the board makes their decision. Even after a decision is announced, the defendant has the right to continue to bring administrative proceedings to the court. The court case can only resume when the administrative litigation procedure determining the validity of the patent has finished. This may take multiple hearings.

According to Li Yang, academics and judicial practice suggest the patent review procedure should be treated as a civil or administrative procedure. If the parties refuse to accept the decision of the review board, they should directly appeal for a second hearing, simplifying the process, reducing litigation time, and speeding up its efficiency. Many have also suggested that the court should be empowered to determine whether a patent is valid in the case of infringement, separately from the patent review authority’s right to examine a patent’s validity.

Indirect infringement, which is to some extent an expansion of the rights of patentees, has also been mentioned. “A simple example, patent protection is like a cup with a lid. Companies A and B agree to that company A makes the cup lid, company B makes the cup body, and the two do not infringe on each other,” Cheng Yongshun said. “But then a third party, company C, sells the cups. If C sells the lid and cup together, the sale constitutes an infringement of patent rights. So do the behaviors of A and B constitute infringement? According to current regulations, it does not, but in real life this kind of thing is very common, so stipulating the indirect infringement system is an obvious measure to strengthen patent rights protection.”

Some scholars have indicated that the Legal Committee of the Standing Committee of the National People’s Congress may submit the draft for consideration soon in 2019. The second draft will continue to solicit opinions. However, there has been no official confirmation of the timeline for the second review yet.

A previous version of the story misstated when the legislature was expected to hold a second reading of a draft of revisions to the country’s Patent Law. The reading was initially expected to take place in the first six months of 2019, but there has been no official confirmation of the timeline for the second review yet.

The original version also misstated the focus of the 2008 amendment.

The story has also been updated to state that entrepreneur Liu Xiucai thinks that other people believe intellectual property is a tool to suppress competition.

The new version also corrected the name of LexField Law Offices and the response to scholars who had called for the separation of intellectual property administration and enforcement.