By Shen Xinyue and Ren Qiuyu 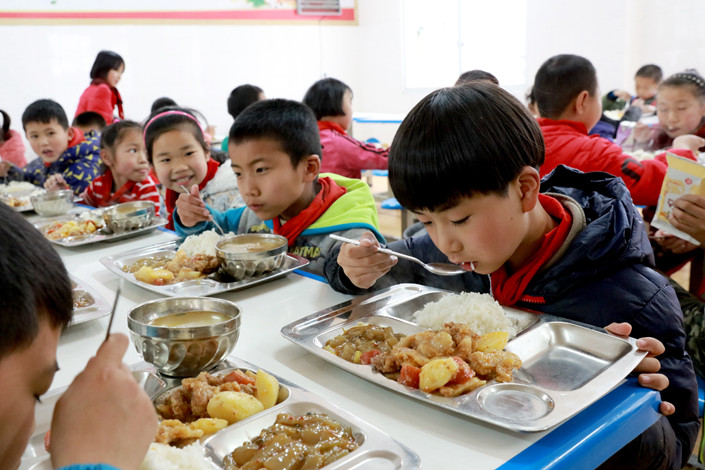 Students eat at a primary school in March 2017. Photo: IC

A private school in Chengdu announced Wednesday that it has dropped its food supplier in response to a scandal in which its students were served spoiled cafeteria food.

On March 11, photos of moldy and rotten food began circulating among parents of students at Chengdu No. 7 Experimental High School, causing outrage. The following day, many parents entered the cafeteria’s store room and took more pictures of spoiled ingredients, which they posted online.

Chinese parents have grown increasingly worried about the safety of their children following a series of scandals involving baby formula and, more recently, vaccines. Such worries compounded with the rising cost of raising children may even contribute to families’ decision not to have more children, if any.

On Wednesday, the school announced that it had terminated its contract with the food supplier and had submitted raw ingredients for inspection to the local education and market supervision bureaus. A number of school officials had been suspended in connection with the incident and would be investigated, it said.

Along with an apology, the announcement also said that the district’s education bureau would take over handling school meals during a “transition period,” and that a long-term food safety mechanism would be formed and it would involve parents.

The State Administration for Market Regulation also noted its concern (link in Chinese) about the situation on Wednesday with a statement urging the local market regulator to “intensify its cooperation with education departments in accordance with the deployment of local party committees and governments” and carry out a thorough investigation.

Two parents told Caixin that they had seen staff removing food from the warehouse on Tuesday evening, which parents suspect was an attempt to get rid of the putrefied products and destroy evidence.

Deyu mainly deals in logistics management and catering management and serves more than 20 schools in Sichuan, according to official releases, covering 100,000 students.

First City was founded in 1992 and moved into education in 2003. It established Chengdu No. 7 Experimental High School that year with an investment of 300 million yuan. In 2016, the school made a net profit of 89.89 million yuan, according to public data. It is divided into an elementary school, a middle school, a high school and an international department. It has more than 6,000 teachers and students.

Multiple attempts to call Chengdu No. 7 Experimental High School and Deyu were unsuccessful. An employee at First City who answered the phone told Caixin that they were unclear on the details and were waiting for the results of the investigation.

Classes at the school have been suspended, several parents told Caixin, and they do not know they will resume.

One parent said that the spoiled food came to light after one boarding student was taken to see a doctor for bloody urine. The doctor suspected that it had been caused by food, and because the student had been living at the school for a while, the parents grew suspicious. The student’s parents went to the school and discovered a “dirty and messy” back kitchen and took photos as evidence. Caixin has not been able to contact the parents who reportedly took the first photos on Monday, and it is unclear how they gained access to the back kitchen.

On Wednesday, the government of Wenjiang district, where the school is located, posted on its official Weibo account that the district’s market regulatory bureau had taken samples of 19 batches of ingredients, inspected all frozen storage and ingredients in the warehouse, and had arranged a supply of safe food to ensure that students would continue to be fed. The district’s public security bureau has also opened an investigation into eight people responsible for food safety at the school, the post said.