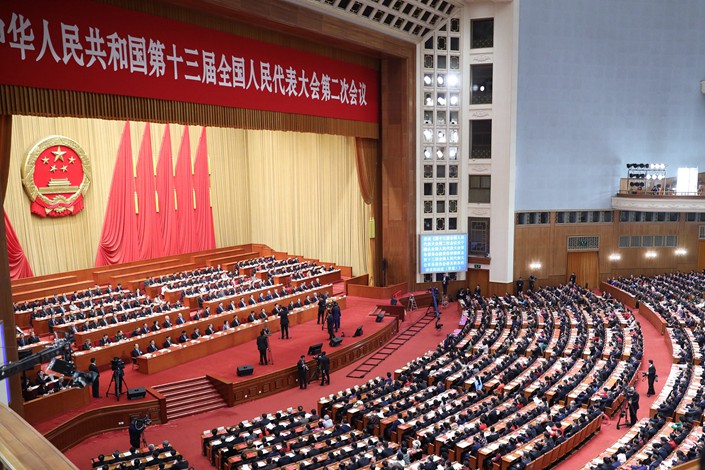 The closing meeting of the second session of the 13th National People’s Congress is held in the Great Hall of the People in Beijing on Friday. Photo: VCG

After decades of what some have called an outdated framework, China has passed a sweeping new Foreign Investment Law.

The law will go into effect on Jan. 1, 2020. It replaces three landmark laws passed in the 1970s and 1980s, which set the framework for the country’s transition from decades of economic isolation.

One key change was made to last week’s draft version: Government employees are prohibited from leaking business secrets that they had access to while performing their duties, and violations have specific punishments.

The NPC has gathered this week in Beijing as part of China’s highest-level annual political gathering, called the “Two Sessions,” in which legislators and members of the Chinese People’s Political Consultative Conference — a political advisory body — confer for two weeks to review China’s recent development and outline its future policy goals. After the meeting closes, new amendments may be added to the foreign investment law, as long as they do not contradict “fundamental principles” of the law.

In addition to the law’s mandate of “equal treatment” of foreign and domestic companies, another notable element includes applying the so-called negative list nationwide. The list specifies which industries or activities foreign businesses are unable to operate in. Before the new law, the negative list had not been implemented uniformly across the country.

The new law also says that the state should not expropriate assets from foreign investors except in special circumstances, when it serves the public interest. Compensation must be offered in these cases. Additionally, the law enshrines foreign investors’ right to freely remit in yuan or foreign currency their profits, capital gains, proceeds from asset disposal, license fees for intellectual property rights, and compensation, in accordance with laws and regulations.

The Foreign Investment Law was passed amid ongoing U.S.-China trade tensions, after a rapid legislative process that took less than three months, beginning with a first reading of the draft law on Dec. 23. It’s far shorter than a previous draft published for public consultation in 2015, which was shelved due to disagreement between government departments about many of the issues it touched on.

Some issues remain unresolved by the passage of the new law, including the role of local governments in attracting foreign investment. But multiple experts have told Caixin that the law will most likely be followed by lower-level regulations and guidance documents to clarify ambiguous areas.

This story has been updated following the publication of the law's final text.