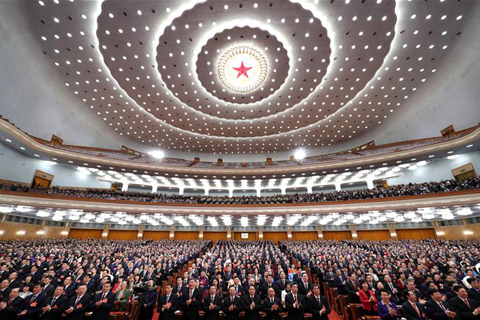 After decades of what some called an outdated framework, China today passed a sweeping new Foreign Investment Law.

China says the law will improve the openness, transparency and predictability of the investment environment, establish equal treatment for foreign and domestic investors, and bar forced technology transfers — a focal point of trade tensions with the U.S.

The law will go into effect on Jan. 1, 2020. The final version is not available to the public, but it was reported that only one change was made to last week’s draft version: an item prohibiting staff working for administrative departments from leaking confidential information, and specifying punishment for such violations.

The NPC has gathered this week in Beijing as part of China’s highest-level annual political gathering, called the Two Sessions, in which legislators and delegates confer for two weeks to review China’s recent development and outline its future policy goals. After the meeting closes today, new amendments may be added to the foreign investment law, as long as they do not contradict “fundamental principles” of the law.

In addition to the law’s mandate of “equal treatment” of foreign and domestic companies, another notable element includes making nationwide the so-called negative list — which defines which industries or activities foreign businesses are able to operate in. Before the new law, the negative list had not been implemented uniformly across the country.