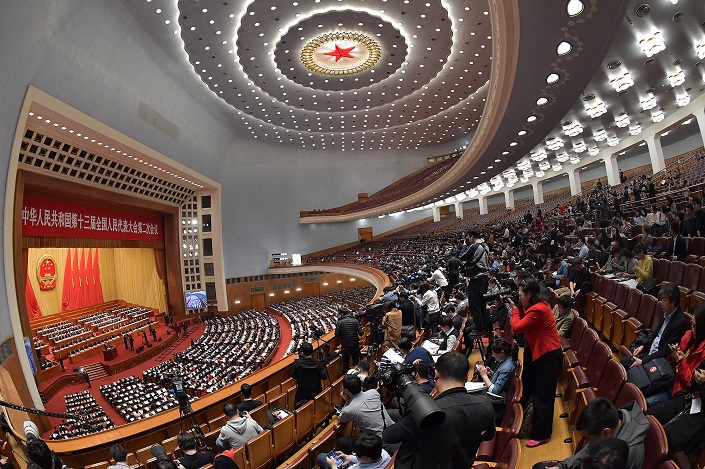 But those laws failed to keep up with the country’s evolving needs as it grew explosively to become the world’s second-largest economy, with trillions of yuan of foreign investment in place and trillions more knocking on China’s door.

The sweeping measure is intended to replace and update the three existing statutes and “improve the openness, transparency and predictability of the investment environment” in China, according to National People’s Congress (NPC) spokesman Zhang Yesui. It would legally establish the principle of equal treatment for foreign and domestic investors and would bar forced technology transfers, a focal point of trade tensions with the U.S.

At the same time, policymakers are pushing the measure through China’s legislative process at breakneck speed. Some academic experts and foreign business groups have voiced concerns that the draft law lacks crucial detail on national security reviews of foreign investment, that it would still impose excessive document-filing requirements with multiple layers of government, that local authorities would still have too much power over foreign investments and that the prohibition on forced technology transfer doesn’t go far enough.

Updating China’s foreign investment laws is a top priority for policymakers partly because of the ongoing trade tensions with the American administration. In addition, the measure is a key prerequisite for completing much-needed, deeper revisions to China’s system for managing investment.

On March 8, the NPC — China’s top legislature — held the third and final reading of the new draft Foreign Investment Law, considered one of the most important items on this year’s legislative agenda. A vote on the bill is set for March 15.

The draft Foreign Investment Law is divided into six chapters, including 41 general provisions on areas including promoting, protecting and managing investment.

The legislative process is an upward “spiral,” and goals cannot be accomplished overnight, Shen Yuxin, a partner with law firm Freshfields Bruckhaus Deringer, told Caixin. But the new law is a first step, Shen said.

In mid-1979, months after China launched sweeping economic reforms and opened up to the world, the country was in a frenzy of lawmaking.

The Standing Committee of the NPC was simultaneously drafting seven laws governing everything from criminal procedure to the operation of local governments. The seven laws were passed on a single vote at the second session of the Fifth National People's Congress held from June 18 to July 1, 1979. They were seen as a milestone for the re-establishment of rule of law after the chaos of the Cultural Revolution.

One of those seven laws, the Law on Sino-Foreign Equity Joint Ventures, was intended to help the country manage the foreign capital it would absorb in the rapid modernization that followed.

At the time, China had no practical experience in handling foreign direct investment — as reflected in the brevity of the 1979 joint ventures law. The measure contained only 15 articles. China did not even have corporate or contract law at the time, meaning that this brief statute had to cover all aspects of foreign investment in China.

Further legislation followed in the 1980s, with the Law on Foreign-Capital Enterprises in 1986 and the Law on Sino-Foreign Cooperative Joint Ventures in 1988.

To start a modernization drive on the scale of China’s at the end of the 20th century, “there was an urgent need to solve the shortfalls in experience, technology and capital,” Assistant Minister of Commerce Li Chenggang said in a Jan. 31 lecture to the NPC on law and reform.

By 1992, China had formally stated its goal of establishing a “socialist market economy” system through reform, in the 14th Work Report by former top leader Jiang Zemin. At the same time, the country was working toward standardizing its management of foreign investment through guidance documents drawn up by the State Council, the cabinet.

Around the time of China’s accession to the World Trade Organization (WTO) in 2001, the country carried out a major revision of the three foreign investment laws to comply with WTO commitments. This resulted in years of “super-national treatment” of foreign investment — a term used in China to describe treatment that favors foreign investors over domestic ones — which ended in 2008.

That year, China enacted its Enterprise Income Tax Law, which integrated the taxation of foreign-funded and domestically funded businesses. Since then, the rollout of anti-monopoly and national security review mechanisms have raised the threshold for foreign investors hoping to enter China, prompting increasing complaints of unfair treatment from foreign investors.

Redundancies or even conflict between the three old measures and the newer company and contract law became increasingly apparent even before China joined the WTO.

China’s legislators began considering replacing the three old laws with one unified law in 2011, but it wasn’t until January 2015 that the Ministry of Commerce released a draft Foreign Investment Law for public consultation. That draft was never submitted to the legislature for consideration because the various affected ministries were unable to agree on much of its content, according to Ma Yu, director of the foreign investment department at the Chinese Academy of International Trade and Economic Cooperation.

Little progress was made until April 2018, when the NPC Standing Committee published its Legislative Work Plan for the year, making clear that a new draft Foreign Investment Law would get its first reading in December.

On Dec. 23, 2018, the new draft Foreign Investment Law was submitted to the seventh session of the Standing Committee of the 13th National People's Congress for a first reading.

With less than three months between its first and third readings, the draft Foreign Investment Law has passed through the legislative process at a dizzying speed last seen when China enacted the seven landmark laws of 1979.

The meeting of the NPC Standing Committee for the second reading of the draft law in late January broke with the committee’s usual practice of holding meetings once every two months. That’s because a second reading in February would have left too little time for the bill to have its requisite three readings in addition to the 30-day window required by law for delegates of the NPC to consider the bill before voting on it in March.

Why the hurry to pass the law by March?

Not clearing the new Foreign Investment Law quickly could set back the process of amending the existing investment management system, Cui Fan, a professor of International Trade at the University of International Business and Economics in Beijing, told Caixin. Many lower-level regulations are “actually waiting for this basic law to be rolled out,” Cui said.

Additionally, there are the ongoing trade tensions between China and the U.S. The new Foreign Investment Law addresses practical concerns including U.S.-China trade frictions, and could help stabilize foreign investment, the Chinese trade and economic cooperation academy’s Ma told Caixin.

Fu Ying, former vice minister of Foreign Affairs, has called the draft Foreign Investment Law “no longer a simple economic issue,” but rather one “involving political significance and involving the external environment for national development.”

The new measure would cement into law for the first time the principle of national treatment — equal treatment for foreign and domestic investors — as well as the use of a negative list of prohibited or restricted business activities when determining foreign investors’ access to China. It also explicitly states that the Chinese government should apply fair and equal supervision to domestic and foreign investors already in the market.

The draft would also prohibit local governments from forcing foreign businesses to transfer technology, addressing one of the major issues of the U.S.-China trade war.

The fast-tracking of the new law has raised some concerns among foreign interests. The second reading of the draft less than one month before the deadline for public comment on the first draft meant that the input of some foreign-funded enterprises may have been submitted too late to figure in the consideration process, according to a statement submitted Feb. 25 to the NPC by the European Union Chamber of Commerce.

One aspect of the current draft that has attracted attention is the lack of detail on China’s national security review mechanism for foreign investments.

China established the mechanism in 2011, and the 2015 version of the draft Foreign Investment Law included nearly 30 articles covering the review process. Most of these articles have been omitted from the current draft, which states only that "the State shall establish a foreign investment security review system to conduct security reviews of foreign investments that affect or may affect national security."

The law could be improved by specifying the situations in which investments “may affect national security,” as well as by stipulating the basic principles and scope of the review process, Xian Tie, a member of the NPC Standing Committee, said at the second reading of the draft law.

The second version of the draft also strengthened standards and increased penalties for foreign-funded businesses that fail to declare investment information in accordance with regulations. This was not changed in the third version, Caixin learned

Additionally, there should be no new information-reporting system for foreign investments because the current system for all enterprises works well for domestic and foreign-funded companies, the EU Chamber of Commerce said.

“Having investors report information repeatedly not only increases the burden on investors, but also is not in line with the direction of comprehensively deepening reform and with international rules and practices,” he said.

“Investment from Hong Kong, Macao and Taiwan was not foreign capital, but neither was it completely equal to domestic capital,” Zhang, the NPC spokesman, said at a March 4 press conference. “In practice, it will be managed with reference to the Foreign Investment Law.”

The draft Foreign Investment Law has also raised concerns that it may not do enough to overhaul China’s current investment management system.

The draft law stipulates that foreign investment will be managed by multiple departments across levels of government, in line with current practice.

But multiple scholars, including Ma, say that this system isn’t appropriate. Currently, around 10,000 officials across central and local government departments handle the management process. China should have one specialized department staffed by around 100 people to handle foreign investments, similar to the Committee on Foreign Investment in the United States, Ma said.

Another area of contention is the role local governments should play in managing foreign investment.

During earlier readings of the draft law, the provision that “local governments at all levels can formulate foreign investment promotion policies within their statutory authority” sparked debate.

Zheng Gongcheng, a Standing Committee member and a prominent academic, argued that it was inappropriate for local governments to have the power to formulate such policies. This would result in foreign-funded enterprises shopping across China for the most preferential policies, Zheng said.

By the third reading, this clause was amended to say, "local governments at or above the county level may formulate policies and measures to promote and facilitate foreign investment within their statutory authority."

The ambiguous wording of the law’s prohibition of forced technology transfers also caused concern. Cai Fang, a Standing Committee member and vice president of the Chinese Academy of Social Sciences, said at the first reading of the draft law that it would be difficult to practically implement the prohibition, which says “administrative organs and their staff shall not use administrative means to force the transfer of technology.”

The EU Chamber of Commerce voiced concern over this provision, which leaves open the possibility for non-administrative bodies to conduct forced technology transfers through other means.

Shen, the Freshfields Bruckhaus Deringer partner, said most of the content of the law served to reiterate and emphasize existing practices, raising them to the level of law.

But the new legislation “should not solidify existing shortcomings in the form of law, creating new obstacles to reform,” Ma said. “If it does so, the new law may need to be revised again soon.”