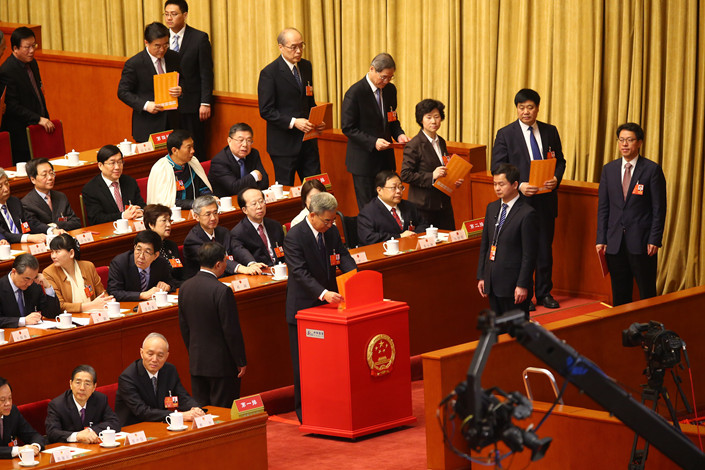 China’s top legislature has begun reviewing a draft law seen as signaling the country’s strong determination to strengthen protection of foreign investment. Legal experts say time required for final passage of such legislation often varies widely. But in this case it could come as soon as March, some added, as part of Beijing’s efforts to resolve its ongoing trade frictions with Washington.

The draft law on foreign investment was submitted to the Standing Committee of National People’s Congress (NPC), China’s legislature, for its first review this past Sunday, according to a report (link in Chinese) by the official Xinhua News Agency. The current Standing Committee has 175 members, while the entire NPC has 2,980.

A draft law submitted to the committee will generally go through three reviews before being put to a final vote, which can come at different levels depending on the nature of the legislation. More fundamental laws are typically voted on by the entire NPC, while more incremental ones can be passed simply by the Standing Committee. Past records show it sometimes takes months or even years for a draft submitted to the Standing Committee to become law.

An older version of the draft was published in 2015 for public comment by the Ministry of Commerce. At that time the ministry said the draft, if adopted, would replace the three existing laws on Chinese-foreign equity joint ventures, contractual joint ventures and wholly foreign-owned enterprises.

In the past, some less contentious drafts were put to vote after only two deliberations. But more controversial ones have gone through up to four or five deliberations and taken years without becoming law. China’s first e-commerce law, for example, was first submitted to the Standing Committee two years ago, and went through four deliberations after that, the final one in August. It passed that month and is now set to take effect on Jan. 1.

All three existing laws that the new draft would replace were approved at the NPC level. Because of that fact, the Standing Committee will most likely submit its final draft of the new foreign investment law for a vote by the entire NPC, according to Ren Qing, a partner with Chinese law firm Global Law Office.

Ren said he expects the draft law to go through three deliberations, and it could be put to a vote as soon as 2020 at the annual meeting of the NPC that takes place each March. Others expect a vote could come even sooner.

“Given the ongoing Sino-U.S. trade frictions, it is possible that the draft would be put to vote at the NPC meeting” three months from now, said Shen Yuxin, a partner with law firm Freshfields Bruckhaus Deringer.

Shen said the draft law is likely to face less pushback than when the earlier version was introduced in 2015, thanks to a list of measures that the government has introduced in the past two years. Those include implementation of negative lists for foreign investments, as well as the switch from an approval-based system to a simpler recording-based system for the registration of foreign enterprises.

“Some of the measures, such as the negative lists, have laid the groundwork for the introduction of the draft law on foreign investment,” said Qi Huan, director of the Institute of International Economic Law at the China University of Political Science and Law. She also said the draft could come to a final vote as soon as March.

Passage of a law would help China show its resolve to address some of the issues behind ongoing trade frictions, Qi added.

The draft has attracted great attention as it addresses some of the major complaints from the administration of U.S. President Donald Trump and foreign businesses operating in China. For example, it would, prohibit local governments from using administrative means to force technology transfers from foreign businesses.