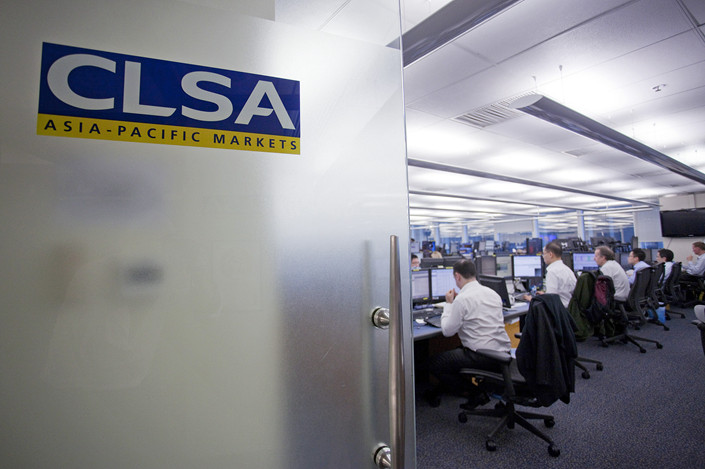 The CLSA Asia-Pacific Markets logo is displayed on a door at the company's offices in Hong Kong in July 2012. Photo: VCG

Hong Kong-based brokerage CLSA Ltd. has lost its second senior executive in as many months, while a third is said to be considering his position.

It’s the second senior resignation at the 33-year-old firm after Chairman Tang Zhenyi left in February, and comes amid an ongoing management reshuffle that has raised concerns in the market about friction between the Hong Kong company and its Beijing-based parent.

CLSA is owned by Citic Securities Co. Ltd. — China’s largest securities firm by assets — which acquired it for $1.25 billion in 2013 as part of an overseas expansion bid.

Citic Securities Chairman Zhang Youjun, who succeeded Tang as CLSA chairman, had tried to retain Slone by offering him a promotion to CLSA co-chairman and a position on the executive committee at Citic Securities, Caixin understands, but he declined. It remains unclear who will succeed him.

CLSA’s Chief Operating Officer Nigel Beattie, who joined the company in March 2014, is also considering leaving his job, a source told Caixin on condition of anonymity. The same source said Beattie was in discussions about taking over as CEO. Caixin’s attempts to contact Beattie failed.

“We had a good start, after the integration. But due to all kinds of complexities, I suddenly found out, with great pain, that I myself had become a block, or even a negative asset, on the path for CLSA’s future growth,” Tang said to CLSA employees on the eve of his resignation in a letter seen by Caixin.

Tang said he chose to resign for the greater good of the company, and would let those who “can better align the minds and thoughts across the platforms” lead the institution. Before joining CLSA in 2017, Tang worked for the Ministry of Finance, the World Bank Group, and the state-owned Citic Group Corp. Ltd., a major shareholder of Citic Securities.

“How to view the cultural conflicts depends on whose side you are taking,” a person close to CLSA told Caixin. “In overseas investment banks, Chinese employees can rise to the level of country or regional head, and it’s very hard for them to advance further. Foreign employees in Chinese investment banks feel the same.”

Caixin was unable to reach Jonathan Slone for comment.

CLSA was founded in Hong Kong by former reporters Jim Walker and Gary Coull in 1986 and provides security brokerage and investment banking services.

This story has been updated to replace Tang's translated quotes with those from his original statement in English.