By Yu Hairong and Huixia Sun 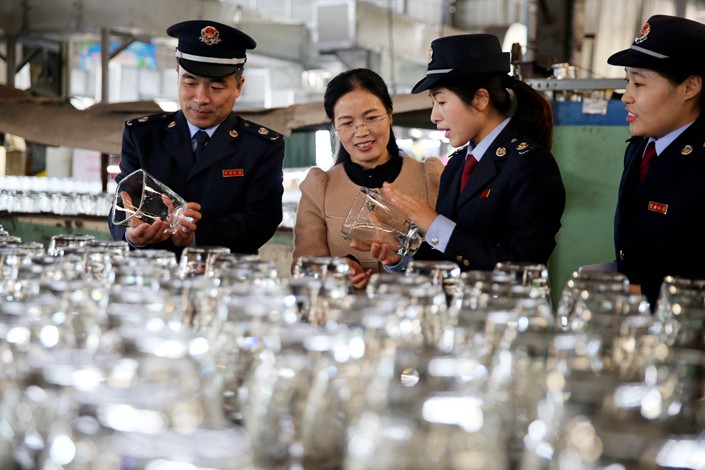 A whopping 2 trillion yuan ($300 billion) in annual tax and fee cuts was unveiled in this year’s government work report in March, beating the expectations of market observers and even some officials.

Minister of Industry and Information Technology Miao Wei said on March 5 that the number caught him by surprise.

“The value-added tax (VAT) cut for the manufacturing industry turned out not to be 1 or 2 percentage points. It will be slashed from 16% to 13%,” he told reporters.

Finance Minister Liu Kun said at a press conference the same day that the nearly 2 trillion yuan figure was an estimate, and the actual number was likely to be greater.

Wang Tao, UBS head of China economic research, noted that the total cut to taxes, fees and company social insurance contributions could be worth as much as 2% of gross domestic product (GDP). She said the hefty cut is set to have a positive impact on companies, particularly manufacturers.

However, against the backdrop of China’s flagging economy, the China-U.S. trade war and policy-related uncertainties, companies may use tax savings to improve cash flows or profitability, rather than capital expenditure, thus the cut is likely to translate into a mere 0.5 to 0.6 percentage points of GDP growth, Wang noted.

The government may also have noticed this issue. While reducing taxes and fees, China lowered the official economic growth target for 2019 to a range of 6% to 6.5% from around 6.5% in 2018. It was only the second time China has set a growth target in the form of a range — the first was in 2016.

“It shows that the government is tolerant of the economic slowdown and does not intend to accelerate growth,” said Zhong Zhengsheng, an economist at CEBM Group.

Zhong said it also reflects the government’s reluctance to achieve fast short-term growth at the expense of long-term growth and debt levels.

This year’s government deficit as a percentage of GDP is projected at 2.8%, about 0.2 percentage points higher than last year but below the 3% market consensus.

The ceiling for local government special bonds was set at 2.15 trillion yuan in 2019, an increase of 800 billion yuan from 2018. The government work report did not set a target for shantytown redevelopment programs, which was unprecedented in recent years.

In addition to cutting government spending, official coffers will receive 1 trillion yuan by collecting more profits from some state-owned financial institutions and state-owned enterprises administered by the central government, and by taking back idle fiscal funds that should have been used, Li said at a press conference.

Governments at all levels should reduce their general public spending to deal with tight budgets amid tax and fee cuts, but must ensure they spend enough on public welfare, Premier Li Keqiang said on March 15 in response to a question from Caixin.

Chinese Premier Li said in March that China must prepare to fight a tough battle as it heads into a new year full of expected and unexpected economic challenges and risks.

UBS forecast that China’s GDP will grow by 6.1%. If China and the U.S. reach a comprehensive trade deal, the economy is likely to expand by between 6.2% and 6.3%, Wang said.

A major factor for determining the lower end of this year’s growth target range is employment. “The primary goal for steady economic growth is job creation,” the work report said.

The target for new urban jobs was set at over 11 million, with a surveyed urban jobless rate at around 5.5% and registered jobless rate below 4.5%.

Many observers noted that this year the concept “employment first” was enshrined in a macroeconomic policy. Li said job creation must be a top priority given the unmitigated employment pressure, significant structural problems and other factors now and in the future.

According to statistics of the Ministry of Human Resources and Social Security, China added 13.61 million jobs in 2018, representing 123.7% of the annual target and setting a new record.

A closer look at the tax cut

On March 15, Premier Li said the tax and fee cuts were one of the key measures to deal with China’s slowing economy.

With the Employment First policy in the spotlight, it is understandable that tax cuts would tilt towards small companies and the manufacturing sector, which contribute about half of China’s total VAT revenue and employ a massive number of workers. In the past, a high tax burden, together with a significant hike in mandatory social security contributions due to improved collection efficiency, encumbered the business expansion of labor-intensive enterprises.

Effective from April 1, in addition to the 3 percentage point VAT cut for manufacturers, the VAT for transportation, warehousing and construction firms will be reduced to 9% from 10%. A 6% tax rate for the service industry, which consists mainly of small companies employing a large number of workers, will remain unchanged.

About 70% of the 2 trillion yuan package will go to tax cuts, with the largest chunk being the VAT cut, according to Finance Minister Liu.

UBS also weighed in with a detailed breakdown. Effective from May 1, the mandatory pension contribution ratio will be reduced to 16% from the current 20%, which means 300 billion yuan to 450 billion yuan in less payments from companies, Wang said.

The approach to tax cuts this year is similar to that in the past: VAT being the major part. However, some experts disputed its effectiveness.

Lou Jiwei, director of the National Council for Social Security Fund and former finance minister, told the Caixin Summit in November that the real burden on Chinese companies was not VAT, which could be passed on to consumers, but corporate income tax. At this year’s “Two Sessions,” Lou reiterated his point. “Due to deflation and a fall in prices, a cut in VAT may have a limited impact on enterprises,” he said.

Although a tax cut translates into economic expansion, stable growth is still dependent on infrastructure investments as well. In 2019, these will increase slightly with a goal of bolstering the sagging economy.

Investment in highways and water transportation will be largely the same as in 2018, but investments in 5G and AI are expected to increase significantly, according to Chen Jinheng, an analyst with China International Capital Corp.