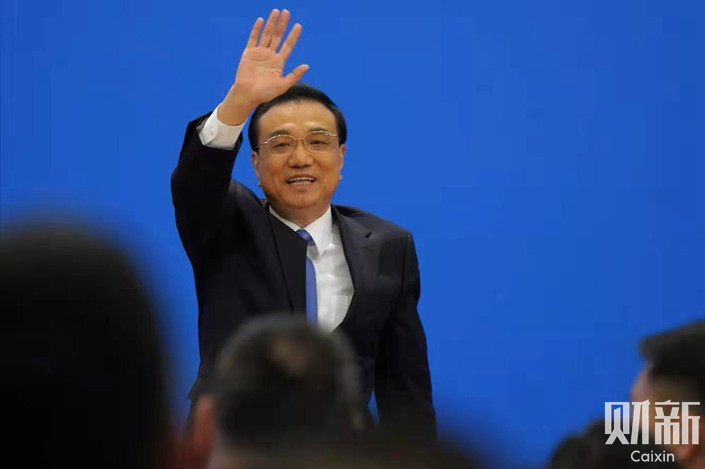 Premier Li Keqiang answers questions from domestic and overseas journalists at the annual session of the National People's Congress, held in Beijing's Great Hall of the People, on March 15. Photo: Chen Liang/Caixin

* From April, China will reduce the rate of value-added tax (VAT) for manufacturers to 13% from 16%, and slash the VAT rate for the transportation and construction sectors to 9% from 10%

(Beijing) — Governments at all levels should reduce their general public spending to deal with tight budgets amid tax and fee cuts, but must ensure they spend enough on public welfare, Premier Li Keqiang said Friday in response to a question from Caixin.

Li’s words come after Beijing promised to cut taxes and fees this year by nearly 2 trillion yuan ($297.64 billion), a big rise from 1.3 trillion yuan last year, to lower the burden on businesses plagued by an economic growth slowdown.

In addition to cutting government spending, official coffers will receive 1 trillion yuan by collecting more profits from some state-owned financial institutions and state-owned enterprises administered by the central government, and by taking back idle fiscal funds that should have been used, Li said at a press conference (link in Chinese) after the National People’s Congress, the country’s top legislature, concluded its annual session earlier today.

From April, China will reduce the rate of value-added tax (VAT) for manufacturers to 13% from 16%, and slash the VAT rate for the transportation and construction sectors to 9% from 10%. In May, it will begin encouraging local governments to collect lower social insurance contributions from businesses within their jurisdictions.

The tax and fee cuts will directly benefit companies with various ownership structures, striking a balance between fairness and efficiency, Li said. Cutting taxes for the manufacturing industry and small and midsize enterprises that contribute a large portion of overall employment will create stronger future sources of government revenue, leading to greater fiscal sustainability, he said.

Besides tax and fee cuts, the country will lower small and micro businesses’ financing costs by 1 percentage point this year, Li said. In the fourth quarter, the average interest rate for new bank loans to small and micro businesses with credit lines of less than 10 million yuan stood at 7.02%, down 0.8 percentage points from the first quarter last year, data (link in Chinese) from the China Banking and Insurance Regulatory Commission show.

The preferential policies for businesses come as the world’s second-largest economy is still suffering from a nationwide debt-cutting campaign and a trade war with the U.S. China’s economy grew 6.6% last year, the slowest annual expansion since 1990.

China has set a broad, lower range of 6% to 6.5% for this year’s gross domestic product (GDP) growth target, down from last year’s target of “around 6.5%.”

In the face of new downward pressure on the economy, setting a range target for GDP growth indicates that China won’t let its economic growth miss the range, and sends a stable signal to the market, Li said. Yet China won’t introduce monetary easing or set a much higher deficit-to-GDP ratio to counter economic headwinds, as such measures may lead to unwanted side effects, he added.

China’s budget deficit this year is expected to widen to 2.76 trillion yuan, representing around 2.8% of GDP, according to this year’s government work report, which Li delivered to legislators on March 5. The ratio is slightly higher than the 2.6% projection for 2018.

The government work report listed “prioritizing employment” as a macroeconomic policy, which is the first time that China has done so, highlighting mounting pressures on the job market amid an economic downturn. Beijing has long made employment a top economic policy priority, as widespread unemployment is likely to breed social instability.

Policymakers will ensure that more than 11 million new jobs will be created in urban areas this year — or more than 13 million if possible — Li said at the press conference.

“The stimulus measures this time mainly target the private corporate sector rather than the highly leveraged property sector and SOEs (state-owned enterprises),” economists with HSBC Global Research said in a note. “This, plus structural reforms based on the competitive neutrality principle, will help engineer a modest growth recovery in the coming quarters.”