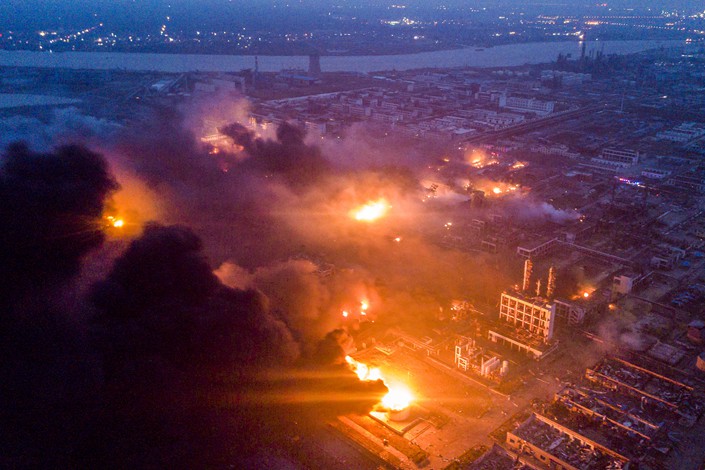 Heavy smoke rises from the the site of an early Thursday blast that killed at least 47 people in Yancheng, East China’s Jiangsu province, on March 22. Photo: VCG

An explosion at a chemical plant in eastern China has killed at least 47 people and seriously injured 90, according to the latest reports.

The blast occurred at 2:48 p.m. on Thursday at a plant run by Tianjiayi Chemical Co. Ltd., at an industrial park in the coastal city of Yancheng, in Jiangsu. The province produces much of China’s output of agricultural chemicals.

In the aftermath of the blast there were fears of chemical contamination in the area, including by the chemical benzene, which some say caused the explosion. Benzene is used to make plastics and is naturally found in crude oil and gasoline. There were further concerns about high concentrations of sulfur dioxide and nitrous oxide in the air, and pollution of the nearby river.

On Friday, the Jiangsu provincial environment bureau (link in Chinese) said that water around the plant had been contaminated by chloroform, dichloroethane and toluene, but measures had been taken to prevent the chemicals from contaminating the river. At a press conference on Friday morning, Yancheng Mayor Cao Lubao said that the fire had been extinguished and that nearly 3,000 people had been evacuated.

Residents of the areas surrounding the many major industrial and chemical parks are not unfamiliar with explosions. In December 2017, 10 people were killed in a blast at a Juxin Biotechnology Co. Ltd. plant in Lianyungang, a city 200 kilometers (125 miles) north of Yancheng. The explosive energy released was estimated to be equivalent to 14.15 tons of TNT.

Thursday’s explosion felt far more powerful, according to one person arriving on the scene, who also experienced the 2017 explosion in Lianyungang. “Many of us feel that the power of this explosion was as strong as 10 Juxin explosions combined,” they told Caixin.

Videos apparently of the Tianjiayi explosion circulated online showing a fireball tens of meters high with billowing smoke. Surrounding towns reported casualties, and vehicles parked on the roads appeared to have been mangled by the impact of the blast. One villager four kilometers away from the explosion told Caixin that all the windows and doors in their village were shattered. “There are no frames left,” they said.

The explosion registered as a magnitude 2.2 earthquake, according to the China Earthquake Administration.

The government has not yet announced the cause of the explosion. People interviewed by Caixin, including eyewitnesses, gave different theories. Speaking from hospital, some workers said that a natural gas fire had ignited storage tanks containing benzene, which then exploded. They described two explosions — a small and a large one.

Other workers said that the explosion appeared to have originated near plant’s mixing room, suggesting raw nitrate materials may have exploded when they met with hydrogen.

Jiang Zhuoshan of international environmental NGO Greenpeace told Caixin that provincial regulations require chemical and industrial parks to have an isolation zone of at least 500 meters. But benzene is a highly volatile and toxic chemical that can cause chronic adverse health effects. Jiang suggested that villagers in Chenjiagang village, two kilometers away, take preventative measures such as closing windows and avoiding going outside. The chemical is likely to be carried by the wind, he said.

An occupational health expert, after reading the data released by Jiangsu Province's Department of Ecology and Environment, told Caixin the pollution caused by the explosion and resulting fire would take time to clear. He said high concentrations of nitrogen dioxide can cause acute bronchitis or bronchopneumonia. Sulfur dioxide and nitrous oxides are a toxic mix, he added.