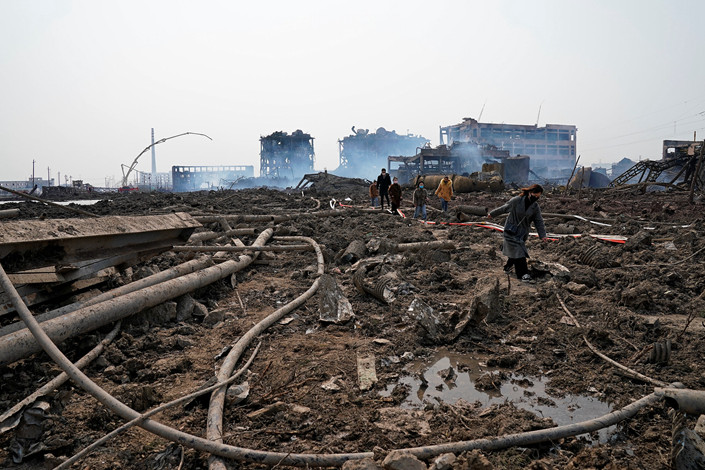 Relatives look for a missing worker on Saturday at a pesticide plant owned by Tianjiayi Chemical following the explosion in Xiangshui county in East China’s Jiangsu province. Photo: VCG

The blast occurred at 2:48 p.m. in an industrial park in Yancheng’s Xiangshui county, at a factory owned by Tianjiayi Chemical Co. Ltd. The city’s official WeChat account said in a post on Monday that 556 people were being treated in hospitals, including 79 who were in a critical condition.

While investigations are continuing, the chemical benzene, which is used to make plastics, is thought to be the cause of the blast. Fears of contamination from benzene and other chemicals are mounting in the area.

Jiangsu’s provincial environmental bureau said on Monday the level of toxic ammonia in nearby parts of the Xinfeng river were 111 times the level considered safe in China, while levels of aniline, a flammable, toxic byproduct of industrial chemical production, were 63.7 times the maximum safe level.

Factories throughout the industrial park were closed when Caixin visited on Friday. A pungent smell hung in the air. Police and special security personnel, some of whom were wearing gas masks, had set roadblocks around the blast site.

At one roadblock, people who said they worked for companies in the industrial park argued with security personnel, saying they wanted to check the premises for damage. They said their superiors were meeting with local government officials, and that they hoped they would be allowed to return to the park soon.

An employee of Jiangsu Zhijiang Chemical Co. Ltd., which stood northwest of Tianjiayi, said he believed at least a dozen people from his company were dead or missing.

“There were two young people working on the platform who were knocked to the ground by the shockwave,” he said. “Our manager was standing outside, and an iron fence fell and punched two holes in his skull.”

Other people at the industrial park told Caixin that employees of one company, Jiangsu Huakong Dahe Industrial Co. Ltd., had escaped unscathed. They said if the accident had occurred at their plant they would have been “finished,” because Dahe “has a hydrogen tank.” Hydrogen gas is highly flammable.

One environmental protection volunteer named Zhang told Caixin he had entered the blast site on Friday. The buildings in the direct vicinity had been flattened, and the ground was covered in debris and blood, he said. The explosion had also created pools of black and yellow liquid.

Aerial photos show that the blast left a crater measuring around 100 meters (328 feet) in diameter.

At the nearby Wangshang village, residents said they were without power until Friday morning and were still without water. Some said their homes had been seriously damaged.

The area has seen more than its share of industrial accidents. In 2017, an explosion 200 kilometers (124 miles) north of Yancheng in Lianyungang killed 10 people. But the scale of Thursday’s explosion was unprecedented in recent history.

“The leadership at the chemical industrial park has been overwhelmed,” one worker there told Caixin. “Who could have expected such a big accident?”

China’s central government has responded to the blast by forming a special investigation team, while more than 4,500 medical personnel and 116 ambulances have been mobilized, according to an announcement by the Yancheng city government Saturday.

On Monday, the State Council’s Work Safety Commission issued an emergency notice calling for a thorough investigation of the explosion, and “severe punishment in accordance to the law for businesses and the responsible personnel who have disregarded regulations and showed no concern for human life.”