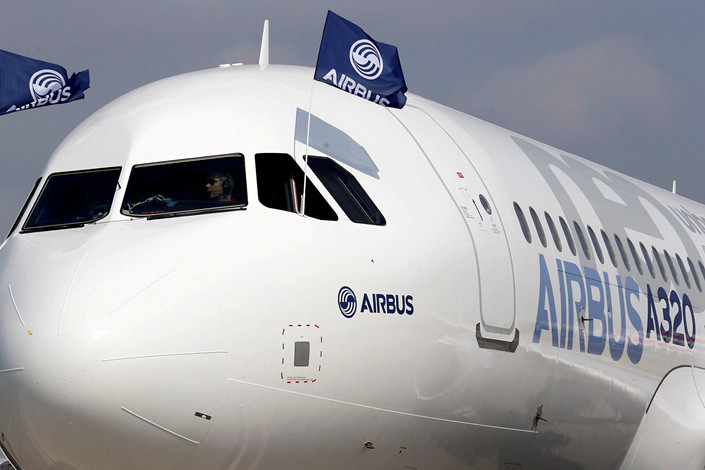 (Beijing) — China has signed a deal to order 300 aircraft from Airbus SE in a $35 billion deal, dealing a blow to the European jet-maker’s archrival Boeing Co., whose bestselling jet model was grounded around the world after a deadly crash in Ethiopia.

The deal, which consists of 290 A320-series narrow-body planes and 10 A350 wide-bodies, was signed during Chinese President Xi Jinping’s state visit to Paris on Monday. State-owned China Aviation Supplies Holding Company (CAS) was acting on China’s behalf.

The 300 orders were more than one-and-a-half times that which French President Emmanuel Macron touted — 184 jets — during a state visit to China last year in January. That $18 billion deal, however, failed to materialize, despite a second French state trip in June and a visit by a delegation of top Airbus executives in September.

The order increase came after Boeing’s own 737 Max narrow-body jet — the chief global rival to the A320 — was grounded following two crashes in five months.

An Ethiopian Airlines-operated Max 8 crashed minutes after takeoff on March 10, killing all 157 people on board. The same model operated by Lion Air crashed into the sea near Indonesia in October, killing all 189 passengers.

Perceived similarities between the incidents prompted aviation regulators around the world, including in China, the U.S., Canada, India and the European Union, to ground either the Max 8 or all Max models. China, the first country to ground the 737 Max jets, has said it had no timetable to resume flights of the jetliner.

Boeing has itself suspended the global delivery of the Max 8 model pending an investigation into the cause of the crashes. More airlines around the world might switch to Airbus planes if the investigation drags on for a long time, industry experts warned (link in Chinese).

China is the world’s second-largest aviation market and is set to become the world’s largest in coming years. Airbus predicted earlier this month the country would need 7,400 new passenger and freighter aircraft in the next two decades, representing almost 20% of total global demand.

By the end of January, Chinese airlines had some 1,730 Airbus aircraft in operation, representing about 47% of the country’s total aviation fleet, according to Airbus. Boeing operates more than half of China’s total fleet, the U.S. company said in March, without offering a specific figure.

Airbus’s last multibillion-dollar deal with China was signed in July 2017, after CAS agreed to procure 140 Airbus jets to coincide with a state visit by Xi to Germany at the time.

With additional reporting from Bloomberg News