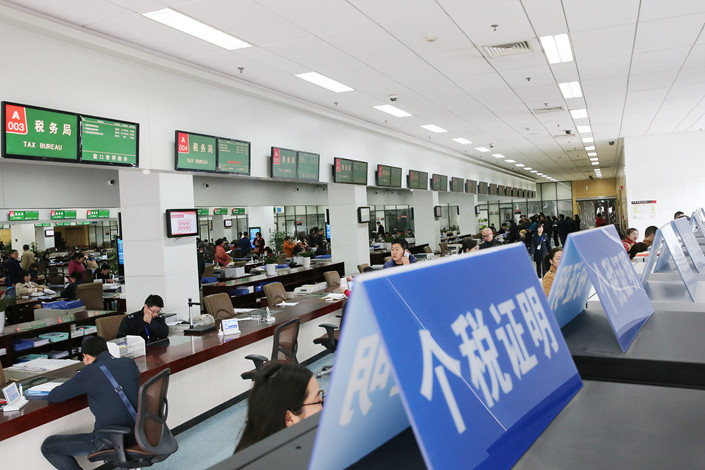 The tax counter of a government office in Jiangsu on March 18, 2019. Photo: VCG

China’s reforms to its personal income tax system could reduce the system's equalizing effect as they sharply reduce the number of taxpayers, and some measures disproportionately benefit those with a relatively higher income, according to a study by Beijing Normal University.

China in October raised the monthly income tax-free threshold to 5,000 yuan ($744) from 3,500 yuan, and from the start of the year added six types of tax deductions, including spending on rent, children’s education and elderly care. The reforms, implemented under the newly revised income tax law, also consolidate into one comprehensive taxable income figure four types of income — salaries, labor service income, writers’ remuneration and royalties — which were previously taxed separately.

The reforms, which aim to encourage consumption and thereby bolster cooling economic growth, are projected to weaken the income tax’s redistributive effect, according to a report by Zhan Peng and Li Shi, researchers at the China Institute for Income Distribution at Beijing Normal University, released on Monday.

The average annual Chinese disposable per capita income was 28,228 yuan in 2018, or 2,352 yuan a month, according to data (link in Chinese) released by the National Bureau of Statistics. This means many of the people covered by the increase in the monthly tax-free threshold are above-average earners in a national context.

As measured by the Gini coefficient — a widely used measure of inequality — the equalizing effect of the new tax regime will be 38% smaller than the pre-reform system, according to the university’s report.

This was partly attributed to the smaller proportion of taxpayers liable to pay income tax under the new law. According to the report, 23.4% of people with a positive income — an income greater than zero — now need to pay tax on their comprehensive taxable income figure. This is significantly down from the 46.9% of people with positive payroll income — from wages and salaries — who had to pay income tax under the old system.

The figure was previously at 74.2% for those with positive labor services income — such as from freelance or informal work.

“In this context, we should not over-emphasize the role of exemptions. Further reform should focus on how to promote a more rational tax structure for all types of income, and ensure that the overall tax burden of residents is reduced while the redistributive effect is enhanced,” the report said.

“Excessive exemption will reduce the tax burden of some groups, but it will also greatly reduce the income redistributive function of personal income tax,” the report said.