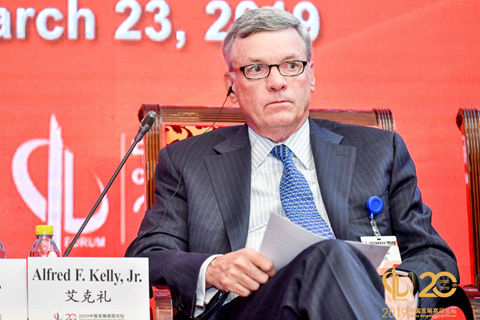 Visa Inc. is planning to set up a wholly foreign-owned company in China and is in the process of applying for a transaction clearing license for onshore yuan.

Alfred F. Kelly, Jr., CEO of Visa Inc., told Caixin that the global credit-card giant has begun ground work for the clearing business to prepare for the operation if it obtains the license. Visa will make full use of its existing market advantages, technical capabilities and infrastructure to operate in China, Kelly said. For instance, it opened an innovation center in Beijing on Friday, the second in Asia following one in Singapore that opened in 2016.

In 2017, Visa and MasterCard submitted applications for the licenses after Beijing promised to further open the market to foreigners. Visa retrieved its application in January 2018 and re-submitted in April the same year. However, sources close to the central bank said the application was not officially reviewed due to lack of required materials, especially for documents surrounding user and vendor protection.

Kelly did not comment on Caixin’s question about whether Visa replied to the regulator’s requests.

Kelly also said that he doesn’t expect Visa to take up a large market share within two or three years after entering China. Rather, it is committed to a long-term investment and values the prospects for the next two or three decades, he said.