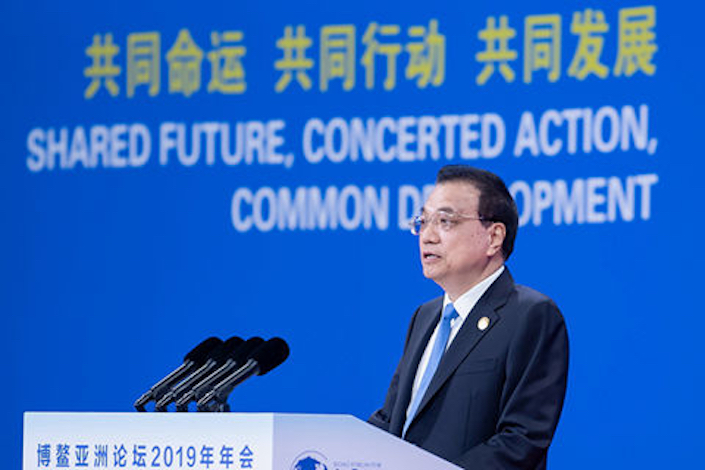 China wants to collect more profits this year from certain state-owned financial institutions — most likely the country’s sovereign wealth fund and perhaps even the central bank, experts have told Caixin.

Beijing is seeking larger dividends from certain centrally administered financial institutions to offset the losses from the tax and fee cuts that it is implementing this year to ease the financial burden on businesses, Premier Li Keqiang said Thursday at the Boao Forum for Asia in the southern island province of Hainan.

The Ministry of Finance holds a majority share in, or outright owns, 23 financial institutions, including policy banks, commercial banks, insurers, asset management companies and financial holding groups. Most of these institutions are listed or have publicly issued bonds, making it harder for Beijing to increase the share of profits it takes from them. In light of that fact, experts have said that it is likely that the central government will tap CIC or even the PBOC for larger dividends.

CIC was established in 2007 after the Ministry of Finance issued 1.55 trillion yuan ($205.28 billion) of special government bonds and bought all the assets of Central Huijin Investment Ltd. Central Huijin is now a subsidiary of CIC and makes equity investments in key state-owned financial institutions. Central Huijin has used the dividends it receives from the institutions it invests in to pay the interest on those bonds since 2007.

CIC also has two other subsidiaries that manage overseas assets and investments, but those units have yet to pay dividends to the Ministry of Finance.

The PBOC could offer the central government another source of income, though it is unclear how big of a source, the experts said. Although the central bank makes its balance sheet public every year, it doesn’t disclose profits or losses. By using figures from the balance sheet along with data on China’s foreign exchange and gold reserves, experts can estimate the central bank’s annual profit, which could be in the neighborhood of several hundred billion yuan. In 2014, economists from Aegon-Industrial Fund Management Co. Ltd. estimated that the central bank would earn a profit of about 180 billion yuan ($26.8 billion) for the year.

Earlier this month, Beijing promised to cut taxes and fees this year by nearly 2 trillion yuan, up considerably from 1.3 trillion yuan last year, in order to lighten the burden on businesses struggling amid the economic slowdown.