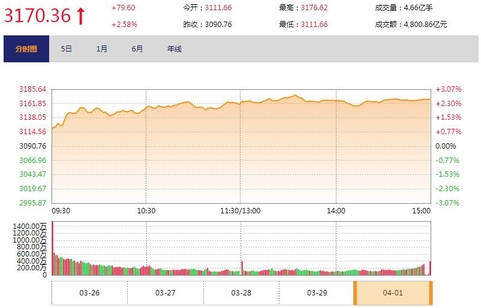 Shanghai stocks posted a second strong day on Monday, bringing their combined gains to nearly 6% over the last two trading days, fueled by the latest surveys showing manufacturing activity in the country was recovering.

Recently released key indicators strengthened investor confidence in the resilience of the Chinese economy in the current quarter and expectations of more government support for growth, analysts said.

“The economic fundamentals in the first quarter have been better than expected,” Li Shaojun, a strategist with Guotai Junan Securities, wrote in a note.

The Caixin China General Manufacturing Purchasing Managers’ Index (PMI) rose to 50.8 in March after contracting for three straight months. The reading hasn’t been this high since July, according the survey’s press release on Monday. That came after the official manufacturing PMI, published by the National Bureau of Statistics on Sunday, also pointed to a recovery of the industry, with the March reading jumping to a six-month high of 50.5.

Hopes are rising that the government will loosen its policies, such as introducing another cut in the amount of cash banks must keep in reserves to encourage lending, as the economy continues to face downward pressure in the April-June period, Li added.