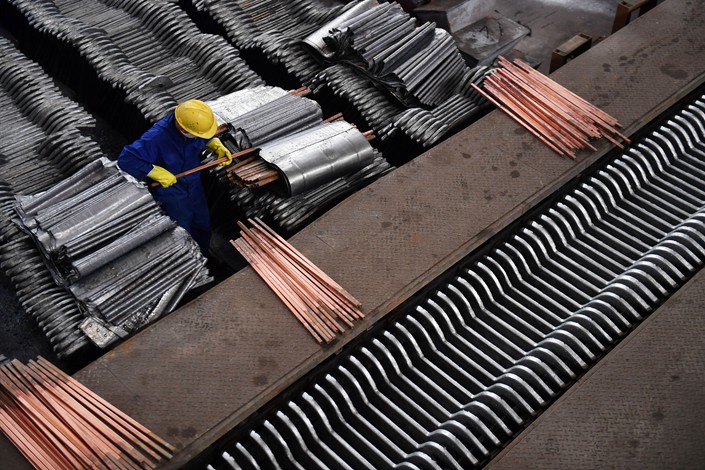 A worker prepares lead and zinc rods at a production workshop in South China’s Hunan province on March 23. Photo: IC

China’s manufacturing activity posted its first growth in four months since November, with employment expanding for the first time in over five years, a Caixin survey showed Monday.

The Caixin China General Manufacturing Purchasing Managers’ Index (PMI), which gives an independent snapshot of operating conditions in the manufacturing sector, rose to 50.8 in March after contracting for three straight months. The reading hasn’t been this high since July.

A reading of 50 divides expansion from contraction. The higher above 50 the faster the expansion, while the further below 50 the greater the contraction.

“Overall, with a more relaxed financing environment, government efforts to bail out the private sector and positive progress in Sino-U.S. trade talks, the situation across the manufacturing sector recovered in March,” Zhong Zhengsheng, director of macroeconomic analysis at consultancy CEBM Group, a subsidiary of Caixin Insight Group, wrote in a report.

A U.S. trade delegation arrived in Beijing Thursday afternoon for the eighth round of trade talks between the countries, Ministry of Commerce Spokesman Gao Feng said at a press conference the same day. “The two sides have made some progress recently, but there’s still a lot of work to be done,” Gao said.

The employment subindex jumped to 50.6, returning to positive territory for the first time since October 2013. The reading marks the highest level since January 2013. Companies surveyed said they hired additional workers to produce more as new business increased, the release said.

China’s official manufacturing PMI, released by the National Bureau of Statistics on Sunday, jumped to 50.5 in March from 49.2 the month before. The reading marks the highest level in six months.

The Caixin Manufacturing PMI, sponsored by Caixin and compiled by data analytics firm IHS Markit Ltd., focuses on light industry, while the official survey focuses on heavy industry. The geographic distributions of the companies covered in the two surveys are also different.

The Caixin China General Services Business Activity Index for March, which tracks the growing services sector, will be released on Wednesday.